RUNNING OUT OF TIME 1 & 2: A Case of Polar Opposites 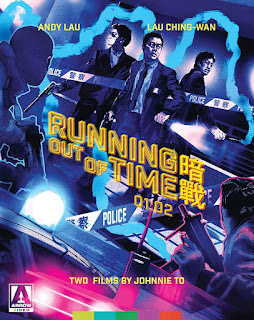 This one-two punch from Arrow Video is a prime example of polar opposites. One film ranks among the best Hong Kong actioners of the late 90s, while its sequel is a drab, dimwitted dumptster fire. What’s truly surprising is that both came from Johnnie To, widely considered one of Hong Kong’s greatest action directors.

Running Out of Time builds on a great concept. Cheun Wah (the great Andy Lau) learns he is dying and has only a month to live. With the time he has left, he plans the masterful heist of a precious diamond first stolen by a crime boss named Baldy (Waise Lee). For reasons not made initially clear, Cheun also lures down-and-out detective Ho Sheung-sang (Lau Ching Wan) into an intriguing game of cat-and-mouse, keeping him “in the loop” while remaining elusive and repeatedly putting the cop in harm’s way.

The film requires some suspension of disbelief and one major character (Ho’s boss, Chief Inspector Wong) is needlessly stupid, but the story is loaded with intriguing twists and excellent action sequences. At its center are two terrific main characters, with an adversarial relationship that evolves into mutual admiration and respect. That makes Cheun more anti-hero than antagonist, played with a perfect balance of pathos, coolness and charm by Lau.

Much of the same cast & crew return for Running Out of Time 2, but what a difference two years makes. While the ol’ Law of Diminishing Returns certainly applies to most sequels, this one is bad enough to draw unfavorable comparisons to Highlander 2: The Quickening. Not even the title makes contextual sense in this lackadaisical “thriller,” which has detective Ho Sheung-sang (Lau Ching Wan again) matching wits with an unnamed thief.

Andy Lau is sorely missed here. In his place is Ekin Cheng as the cocky crook with a perpetual Errol Flynn grin plastered on his face, while Ho is reduced to beleaguered straight-man. Action sequences are infrequent and mostly played for laughs - which it doesn't get - such as an endless, lethargic foot-bike chase which comprises much of the middle act. The film is further dragged down by way too many idiotic, ill-conceived supporting characters, the worst being a cop with a gambling problem.

The biggest difference might be that the screenwriting team of Julien Carbon & Laurent Courtiaud (who created the initial concept, story & characters) are sorely missed in the second film. Perhaps that’s one reason a good portion of the bonus features focus on them. Whatever the case, this set is worth picking up for the first film alone, which is fun, exciting and holds up well to repeated viewings. As for Running Out of Time 2…morbid fascination over its sheer awfulness might make it worth checking out…once.

AUDIO COMMENTARIES FOR EACH FILM - Both by Frank Djeng.

SUPPLEMENTARY BOOKLET - Essay, “On the Edge: Connection, Isolation and Identity in Running Out of Time 1 & 2, by David West; cast, crew & transfer credits.

RUNNING OUT OF TIME:

“THE DIRECTORS’ OVERVIEW OF CARBON AND COURTIAUD” - An archival featurette about screenwriters Julien Carbon & Laurent Courtiaud.

RUNNING OUT OF TIME 2:

“THE MAKING OF RUNNING OUT OF TIME 2” - Archival featurette.