Rains Reigns in BATTLE OF THE WORLDS 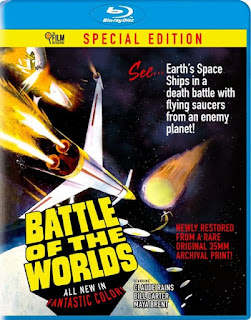 Certain fans of silly cinema might recognize the name of Anthony Dawson. It’s the somewhat infamous pseudonym of a director whose cut-rate classics include Yor, the Hunter from the Future and Cannibal Apocalypse, arguably his best-known films on this side of the pond. But he actually had a career stretching back decades.

A few might even know him by his real name, Antonio Margheriti, especially after superfan Quentin Tarantino immortalized him in Inglourious Basterds (it’s the fake Italian name used by Eli Roth's character).

Of course, most of us know who Claude Rains is (those who don’t should be ashamed of themselves). His participation in 1961’s Battle of the Worlds - far-removed from his legendary roles in Casablanca and The Invisible Man - is sort of a mystery. Did he need the money that bad or just fancy a free trip to Italy? Whatever the reason, Rains acts circles around the mannequins who make up the rest of the cast.

The rest is vintage Dawson…copycat, bargain basement sci-fi, but not without its goofy charms. The plot involves a rogue planet - dubbed “The Outsider” by the brilliant but cantankerous Professor Benson (Rains) - which has wandered into our solar system. Everyone else thinks it’s on a collision course with Earth, while Benson believes it’ll just be a near miss. Instead, the planet parks itself in Earth’s orbit, indicating an intelligence at work. Naturally, it’s time to investigate, even though Benson thinks they should destroy it. Turns out he’s right.

The plot actually takes too long to unfold, but we do have Rains’ amusing performance to pass the time. As Benson, watching him verbally belittle his underlings is a real hoot. Elsewhere, there’s some additional fun to be had at the film’s expense, mostly the daffy dialogue and endearingly tacky special effects. Still, we have to appreciate what Dawson was able to cobble together with a nearly non-existent budget. Even accomplishing that takes a certain amount of talent…and chutzpah.

Though the print shows evidence of haphazard editing - missing frames make the whole thing jumpy as hell - Battle of the Worlds has been given a pretty good restoration by The Film Detective. Like other relics they’ve rescued from obscurity, a few interesting supplemental features are included, mostly related to Margheriti’s prolific career.

FEATURETTE - “The Cinematic Outsider: The Fantastical Worlds of Antonio Margheriti.”