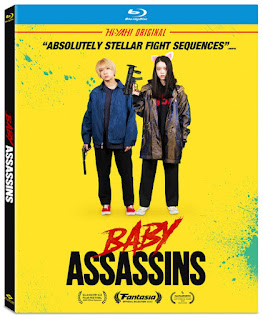 All joking aside, there is a twisted logic in recruiting teenagers as professional assassins. Generally speaking, empathy is one of the last things to develop in most young adults, and with comparatively little work experience at that age, training them to suit your needs would be relatively easy. And hey…it beats flipping burgers for a living.

But Baby Assassins does not set all joking aside. The entire movie coasts on its one-joke premise, that of two typical teenage girls with an atypical job. Chisato and Mahiro (Akitani Mone & Saori Izawa) are skilled killers who really enjoy what they do. Though not quite friends, they seem to get along fairly well, at least until their bosses insist they become roommates and get “real” jobs as a cover for their actual line of work.

Much of the film has them trying - unsuccessfully - to land and keep the type of employment befitting most teenagers, while getting on each other’s nerves in their tiny apartment. These scenes are often very funny, but just as often meandering. While Mone and Izawa are excellent, perfectly capturing teenage attitudes (and some insecurities), hearing them drone on and on about inconsequential concerns is sometimes as tiresome as listening to real teenagers.

Baby Assassins is ultimately more fun when focusing on the girls in action, especially once they run afoul of the Yakuza by assassinating one of its prominent members. They appear amusingly nonplussed by their dire circumstances, even when severely outnumbered during the fiery climax. Violent, bloody and extremely well-choreographed, the rousing conclusion is both funny and jaw-dropping. You just gotta sift through some baggage to get to it.