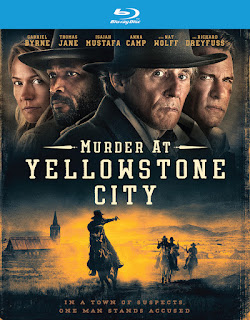 This western whodunit features a great cast, decent production design and a fairly solid premise. But while certainly watchable, Murder at Yellowstone City might be a little too long and languidly paced for its own good. It also doesn’t help that director Richard Gray throws in a phenomenally clumsy piece of foreshadowing within the first minutes, practically giving away one of its biggest secrets.

The titular town has fallen on hard times, at least until prospector Robert Dunnigan (Zach McGowan) strikes gold. But on the way back home from celebrating, he’s murdered. Sheriff Ambrose (Garbriel Byrne) immediately suspects stranger-in-town Cicero (Isiah Mustafa, aka 'the Old Spice guy') and throws him in jail to stand trial. While most assume he’s guilty (for dubious reasons), a few kinder hearts believe otherwise, such as Alice Murphy (Anna Camp), the wife of preacher-with-a dark-past Thaddeus (Thomas Jane). She’s eventually able to convince Thaddeus something’s not quite right about the whole incident, yet despite mounting evidence indicating someone else is the killer, Ambrose is too stubborn and headstrong to listen. Meanwhile, the real killer frames Cicero for a few other murders by allowing him to escape (making him look even guiltier, of course).

Ambrose’s overzealous son, Jim (Nat Wolff), figures into the plot, as does Dunnigan’s wayward widow, Emma (Scottie Thompson). But elsewhere, the narrative juggles a larger assortment of characters than it really needs. While it’s always great to see Richard Dreyfuss still working, his character - a gay saloonkeeper - is completely superfluous. The film is also pretty slow-going for a while, with too many scenes of melodrama and grim philosophizing when we’d rather watch bullets fly. A good 30 minutes could have been trimmed from the film without significantly affecting the story, especially since it’s pretty obvious early-on who’s behind these murders. That faux-pas is on Gray, who lets his camera linger a bit too long on one particular character for us to suspect anyone else. However, the final act compensates our patience with a lively gunfight that appears to involve half the town.

With a better cast than your usual modestly-budgeted, straight-to-video western, Murder at Yellowstone City is one of those movies you watch and forget about. It’s a passable time killer if one’s hankering for a horse opera - or a horse soap opera -  but the murder mystery aspects of the story come up short.