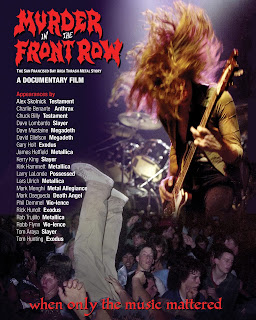 Metallica notwithstanding, the subgenre known as thrash metal was never fully embraced by the mainstream, which was a major part of its appeal to both the artists and their fans. Complex, in-your-face and unbelievably fast, this music isn’t for everybody. But for a few glorious years, thrash was a breath of fresh air and the antithesis of hair metal’s pretty-boy preening.

Thrash’s heyday was short-lived, but its influence was widespread and can still be heard in such later subgenres as death metal, black metal and grindcore. While few of the pioneers ever went on to sell millions of records, most have since earned a considerable amount of respect from historians, critics and fellow musicians (something you can’t say about Motley Crue with a straight face).

Murder in the Front Row (the title taken from an Exodus song) doesn’t purport to be an extensive history of the genre. Instead, the film is a nostalgic look back at thrash’s humble beginnings in the San Francisco area (roughly 1983-1986), as fondly recalled by some of its most prominent purveyors and promoters. An underground movement if there ever was one, its culture of camaraderie among bands, tape trading, raucous live shows and the DYI work ethic is thoroughly presented through vintage footage, photos and lively anecdotes from those who were there. Despite stories of drunkenness and wild behavior - on stage and off - most of these guys come across as congenial and unpretentious (even those who managed to become actual rock stars).

But as Slayer’s Kerry King amusingly states at the beginning of his interview, “I don’t need to say who I am. Anyone watching this already knows.” One could probably say that about the entire film. Murder in the Front Row definitely preaches to the converted and diehard fans aren’t likely to see or hear much that hasn’t been well-documented elsewhere (though hearing it from the horse’s mouth is pretty damned entertaining). However, if your knowledge of thrash begins and ends with Metallica, this documentary will be revelatory.