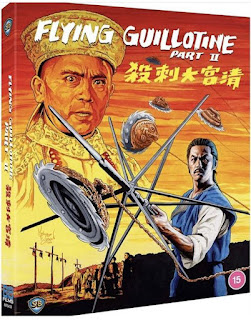 Flying Guillotine 2 is another one of those cult obscurities that has Quentin Tarantino’s seal of approval. You can certainly see its influence on Kill Bill Vol 1, especially the deliriously over-the-top swordplay and the weapons of the title.

The flying guillotines themselves are pretty insane…saucer shaped buzzsaws attached to a chain. The user throws it out, where it lands on the victim, drops a black blade-lined veil around their head and swiftly decapitates them. Then he collects the head by yanking it back like a yo-yo. Fortunately, we get to see these things at-work early and often, the preferred weapon of tyrannical emperor Yung Cheng (Feng Ku) to vanquish his enemies.

Those enemies are Hans who are part of a resistance movement determined to kill Cheng and end his reign of terror. One of them, Ma Teng (Lung Ti), has even developed an umbrella-like device that stops the guillotines. Cheng responds by directing his military strategist to design a bigger-and-better flying guillotine. Meanwhile, the strategist’s daughter, Na Lan (Szu Shih), is secretly working with the resistance and goes undercover at the emperor’s palace to steal the plans for the new guillotine.

Of course, the plot, performances and characters are perfunctory because Flying Guillotine 2 is all about brawls & beheadings. The action sequences are brilliantly-choreographed ballets of close-quarters mayhem, though not nearly as graphic as the concept suggests. We may not be all that invested in the story or characters, but watching everyone slice & dice each other for 90 minutes is fairly entertaining.

Speaking of which, even though Flying Guillotines 2 is technically a sequel, it pretty much works just fine as a stand-alone film. I gotta say, though, the ending sucks, concluding with a mid-action freeze-frame during the climax…no resolution, no denouement. It might be the most maddeningly abrupt conclusion to a film since The Birds. Was that intentional or did someone brain-fart during post?

SUPPLEMENTAL BOOKLET - Features an essay, “Watch Out for the Flying Guillotines!,” by author Barry Forshaw.