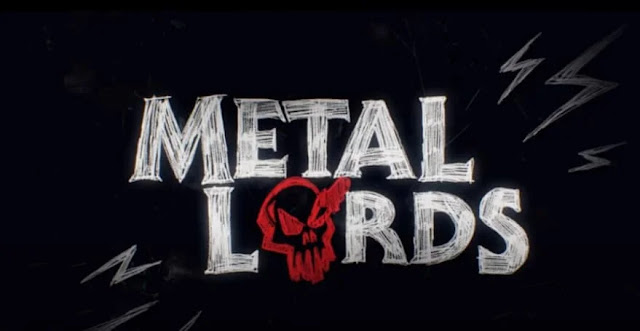 This time, however, the treasure came to me.

For 25 years, I’ve been teaching at Parkrose Middle School, where the recent Netflix film, Metal Lords, was shot. It’s a fun little comedy about two metal heads hoping to win their school’s battle of the bands. My place of work doubled as Glenwood Lake High School, the film’s setting.

Most of the shooting occurred during the height of the COVID pandemic, when the building was largely empty because we all were forced to work from home and teach through Zoom meetings. Unfortunately, those same COVID restrictions kept me from being allowed to visit the set, though I did drive through the parking lot one time to check-out the fleet of production trailers.

Finally seeing Metal Lords a year later was sorta surreal. Every ten minutes or so, I’d nudge my wife to say, “Hey, our cafeteria!,” or “That’s Britt’s room!” Especially cool was a scene in which two main characters are arguing and I could see my own classroom in the background, a silhouetted extra walking among my desks (probably the same bastard who stole my stapler).

Then today, as we were all preparing for the new school year - back to in-person teaching, I’m happy to say -  I received a wonderful surprise. My principal, Annette, managed to acquire an actual prop from the film: The Glenwood Lake High School emblem sign. And knowing my love of movies, she gave it to me, instructing me to simply throw it away if I didn’t want it.

Was she crazy? Of all the movie-related knicky-knacks I’ve collected over the years, this is the first thing that was actually used in a movie. This baby ain’t going anywhere but on a wall, where it’ll remain long after everyone has forgotten about Metal Lords itself. Thanks again, Annette! You made my day!