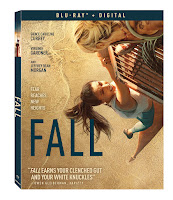 🙀FALL arrives on Digital on September 27 and Blu-ray + Digital and DVD October 18 from Lionsgate.
For best friends Becky (Grace Caroline Currey) and Hunter (Virginia Gardner), life is all about conquering fears and pushing limits. But after they climb 2,000 feet to the top of a remote, abandoned radio tower, they find themselves stranded with no way down. Now Becky and Hunter's expert climbing skills will be put to the ultimate test as they desperately fight to survive the elements, a lack of supplies, and vertigo-inducing heights in this adrenaline-fueled thriller from the producers of 47 Meters Down. Costarring Jeffrey Dean Morgan. The adrenaline fueling thriller, Fall, arrives on Digital September 27 and Blu-ray + Digital and DVD October 18 from Lionsgate. Written and directed by Scott Mann (Heist, The Tournament). 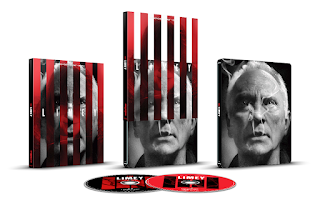 😺THE LIMEY arrives October 11 on 4K Ultra HD + Blu-ray + Digital SteelBook from Lionsgate.
Oscar nominees Terence Stamp (Billy Budd), Lesley Ann Warren (Victor/Victoria), and Peter Fonda (Ulee’s Gold) team up with the director of Out of Sight and Sex, Lies, and Videotape for this critically acclaimed thriller that Newsday called “a lean and mean treat for savvy action lovers.” British ex-con Wilson (Terence Stamp) arrives in Los Angeles to investigate the mystery of his daughter’s “accidental” death. His prime suspect, the wealthy, heavily guarded music promoter Terry Valentine (Peter Fonda), is no easy target. Propelled into an increasingly brutal search for truth, Wilson, with single-mindedness and terrifying precision, moves unstoppably toward revenge. Vengeance has no boundaries in the crime-drama, The Limey, Directed by Steven Soderbergh, which arrives on 4K Ultra HD + Blu-ray + Digital SteelBook October 11 from Lionsgate. 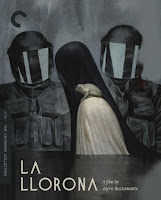 🙀LA LLORONA on Blu-ray & DVD October 18 from Criterion Collection.
A country’s bloody history stains the present in the Guatemalan auteur Jayro Bustamante’s transfixing fusion of folk horror and searing political commentary, inspired by the real-life indictment of the authoritarian Efraín Ríos Montt for crimes against humanity. A notorious, now aging former military dictator stands trial for atrocities committed against Guatemala’s Maya communities. While battling legal repercussions and the people’s demands for justice, he and his family are plagued by a series of increasingly strange and disturbing occurrences, seemingly brought on by an enigmatic new housekeeper (María Mercedes Coroy). With a restraint that renders the film’s shocks all the more potent, Bustamante crafts a chilling vision of a nation reckoning with collective harms and the restless ghosts of a past that refuses to die. Mastered in 2K digital, this release includes an interview with director Jayro Bustamante and a making-of documentary. 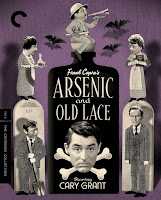 😺ARSENIC AND OLD LACE on Blu-ray & DVD October 11 from Criterion Collection.
Frank Capra adapted a hit stage play for this marvelous screwball meeting of the madcap and the macabre. On Halloween, newly married drama critic Mortimer Brewster (Cary Grant, cutting loose in a hilariously harried performance) returns home to Brooklyn, where his adorably dotty aunts (Josephine Hull and Jean Adair, who both starred in the Broadway production) greet him with love, sweetness . . . and a grisly surprise: the corpses buried in their cellar. A bugle-playing brother (John Alexander) who thinks he’s Teddy Roosevelt, a crazed criminal who’s a dead ringer for Boris Karloff (Raymond Massey), and a seriously slippery plastic surgeon (Peter Lorre) are among the outré oddballs populating Arsenic and Old Lace, a diabolical delight that only gets funnier as the body count rises. Featuring a new 4K restoration, this release also features a new audio commentary and the 1952 radio adaptation featuring Boris Karloff.
Posted by D.M. Anderson at 12:46 PM