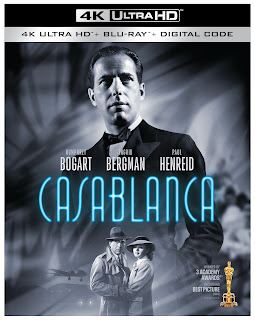 😺CASABLANCA arrives on Ultra HD Blu-ray and Digital on November 8 from Warner Bros.
Celebrating the 80th anniversary of its 1942 release, the legendary Warner Bros. film Casablanca will be released on Ultra HD Blu-ray Combo Pack and Digital on November 8, it was announced today by Warner Bros. Home Entertainment. Starring Academy Award winners Humphrey Bogart and Ingrid Bergman, critic Leonard Maltin calls Casablanca “the best Hollywood movie of all time.” The new Casablanca 4K Ultra High-Definition image was restored and remastered from a 2022 4K 16bit film scan of the best-surviving nitrate film elements. The 4K-scanned digital images went through an extensive digital restoration process to clean and repair the picture for an unprecedented and pristine ultra-high-resolution presentation.  The restored images were then graded in High Dynamic Range for today’s premium 4K display experience, providing the highest fidelity in image contrast and detail retention.  This work was meticulously handled by Warner Bros. Motion Picture Imaging.  The original theatrical mono audio has also been newly restored as well, providing a richer and broader frequency response than previously possible. 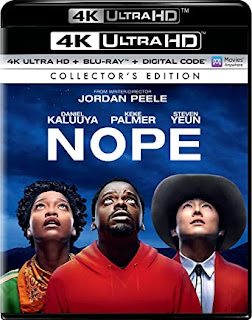 🙀NOPE on Digital September 20, 2022 4K UHD, Blu-ray and DVD October 25, 2022 from Universal.
Jordan Peele reimagines the summer movie with NOPE, an expansive epic of uncanny science fiction. Following their father’s shocking death, Hollywood animal wrangler OJ (Kaluuya) and his sister Emerald (Palmer) begin observing unexplained phenomena on their vast Southern California ranch that leads them down an obsessive rabbit hole as they plot attempts to capture the mystery on camera. Along with a former child star turned family theme park ringmaster (Yeun) who neighbors the siblings, the pair’s efforts to chase the spectacle soon bring terrifying consequences and unimaginable horror. The result is a complex social thriller that unpacks the seeds of violence, risk and opportunism that are inseparable from the romanticized history of the American West … and from show business itself. Certified Fresh on Rotten Tomatoes, this “spellbinder that keeps pushing boundaries” (Peter Travers, ABC News) will have you never looking at clouds the same way ever again. The exclusive Collector’s Edition comes filled with more than 90 minutes of never-before-seen bonus content, including a revealing documentary that dives deep into the film’s rich DNA and Peele’s extraordinary vision; an exploration into the conception, design and execution of entity “Jean Jacket”; deleted scenes, a gag reel and more taking audiences behind the scenes of the out-of-this-world adventure. 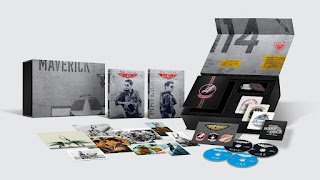 😺TOP GUN 2-MOVIE 4K STEELBOOK SUPERFAN COLLECTION Coming December 6 from Paramount.
The #1 film of 2022, with over $1.4 billion at the global box office, and the original pop culture touchstone that helped define a generation come together in one must-own set, the TOP GUN 2-MOVIE 4K STEELBOOK SUPERFAN COLLECTION, arriving on December 6, 2022 from Paramount Home Entertainment. This highly collectible release makes an ideal gift and boasts nearly six hours of bonus content exploring the enduing popularity of the 1986 sensation TOP GUN, as well as this year’s record-breaking global phenomenon TOP GUN: MAVERICK.  Celebrate the films that have captured the imaginations of fans around the world through behind-the-scenes footage, interviews with Tom Cruise and producer Jerry Bruckheimer, and much more. The TOP GUN 2-MOVIE 4K STEELBOOK SUPERFAN COLLECTION includes two SteelBook cases with both 4K Ultra HD and Blu-ray Discs of TOP GUN and TOP GUN: MAVERICK, access to Digital copies of each film, plus TOP GUN: MAVERICK dog tags, a leather “Maverick” keyring, magnetic decals, coasters and photos. 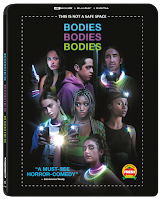 🙀BODIES BODIES BODIES arrives on 4K Ultra HD, Blu-ray and DVD October 18 from Lionsgate.
A horror-comedy following a group of young friends after a party game turns deadly, Bodies Bodies Bodies arrives on Blu-ray (+ DVD + Digital) and DVD October 18 from Lionsgate. Directed by Halina Reijn (Instinct), Bodies Bodies Bodies will be available for the suggested retail price of $39.99 for Blu-ray (+ DVD + Digital) and $29.96 on DVD. Best Buy will have a 4K (+ Blu-ray + Digital) combo package exclusively with a suggested retail price of $42.99. OFFICIAL SYNOPSIS: When a group of 20-somethings get stuck at a remote family mansion during a hurricane, a party game ends with a dead body on the ground and fingers pointed everywhere. As they try to find the killer among them, fake friends and real enemies have to learn who to trust — and how to survive — in this fresh and funny Gen-Z meltdown starring Pete Davidson, Amandla Stenberg, and Maria Bakalova.
Posted by D.M. Anderson at 7:55 AM