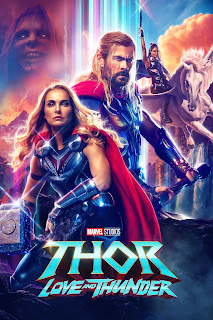 Those giant screaming goats…I could watch a whole movie featuring just them. A gift to Thor for saving a kingdom during the first act, they're a hilarious running gag that sets the tone for the whole film.

It’s funny how the Thor movies used to be the black sheep of the MCU but are now the ones I look most forward to, though I suspect I’m in the minority in this opinion. The first two films were watchable, but I never found the title character particularly engaging. Then Ragnarok came along, loaded with comedy which sometimes bordered on farce, as well as a crazy story that - refreshingly - did not involve the fate of the Earth. We can probably thank director Taika Waititi for that.

Well, maybe not everybody wants to thank him, especially since Thor: Love and Thunder (also directed & co-written by Waititi) ventures even further into comedy that sometimes approaches camp. Of course you have fanboys resentful of how jokey the franchise has become, apparently refusing to accept that the very concept of Thor is inherently ridiculous (so why not throw in a few giant screaming goats?).

Like the Ant-Man and Guardians of the Galaxy films, Thor has become a franchise with considerable appeal to those who don’t typically go-in for superhero films and couldn’t care less about the MCU timeline. Hence, Love and Thunder is light, breezy and fast-moving fun. There’s the usual visual fireworks, but with an emphasis on humor, relationships and some kick-ass Guns ‘N’ Roses music, the plot itself is almost perfunctory. Which is fine, because not only has Thor himself (Chris Hemsworth) become personable and amusingly fallible, Natalie Portman’s return as Jane Foster (and The Mighty Thor) allows for some romantic tension and heartfelt poignancy, especially during the final act.

Elsewhere, Christian Bale is sort of wasted as the primary antagonist, Gorr the God Butcher. As a grieving father sworn to destroy all gods after being betrayed by his own, he’s good - and somewhat sympathetic - but really, the character could have been played by anybody. Conversely, Russel Crowe has a field day playing Zeus, the mightiest of all Gods, as well as the most narcissistic. He’s to Love and Thunder what Jeff Goldblum was to Ragnarok.

Taika Waititi is arguably the film’s MVP, once again bringing irreverence (and giant screaming goats) to a franchise that really benefits from his touch. And while there’s a bit of MCU housekeeping near the beginning, Thor: Love and Thunder works just fine as a stand-alone film. Not everyone will appreciate its goofiness - or the surprising amount of sentimentality - but those who found Ragnarok a refreshing change in direction should have no complaints.