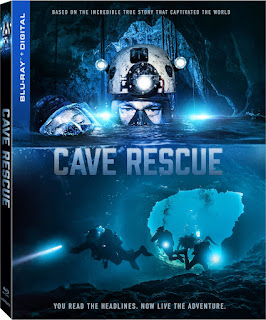 Cave Rescue is the third film released within a year that tells the same true story: The efforts to save a Thai youth soccer team trapped in a flooded cave. The first was The Rescue, a documentary, followed by Thirteen Lives, Ron Howard’s big budget dramatization with an impressive cast.

Though actually produced first and re-edited for a 2022 release, Cave Rescue tries to offer the best of both worlds…the authenticity of a documentary and the dramatic urgency inherent within the situation. Unfortunately, the film ends up being a dull exercise in redundancy and it's the viewer that needs to be rescued...from boredom.

The promotional campaign touts casting many of the same divers who participated in the rescue, playing themselves as they reenact their heroism. While none of them embarrass themselves, it’s obvious acting is not their forte. Historically, hiring people to play themselves in a movie has never worked out very well. Just ask Clint Eastwood.

But not even Viggo Mortensen could do anything with the screenplay, which is devoid of anything resembling characterization. We learn almost nothing about anyone involved beyond on-screen text providing their names and occupations. In fact, when one of them dies, instead of feeling a sense of loss, we’re just wondering which guy it was. It’s damn tough to become emotionally invested in any rescue when characters simply exist to swim, shiver or provide exposition.

Speaking of which, the narrative dutifully documents events inside and outside of the cave. Each step of the rescue is preceded by a title card explaining things further. It’s all competently shot, but coasts on the conceit that meticulous attention to detail will manufacture all the drama and conflict the story needs. That may be true for documentaries, but in movies “based on true events” where the outcome is a given, some dramatic embellishment is expected. Otherwise, you might as well watch a documentary.

Despite honorable intentions and solid technical merits, Cave Rescue is a repetitive, redundant and tedious endurance test that practically dares the viewer to stick with it to the end. You’re better off seeking out one of the other films depicting the same event, both of which are far more compelling.