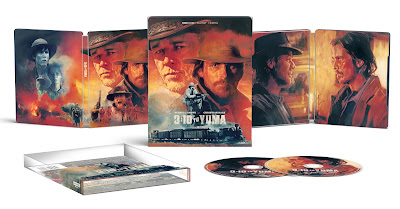 Here’s one for the real collectors…those who display their movies the same way bookworms make hardcover editions part of their living room feng shui. You know who you are.

Setting physical aesthetics aside for a moment, 3:10 to Yuma is one of the best remakes ever made, respectful to the spirit of the original while surpassing it in many ways. I would also argue that, so far, it’s the best American western of the 21st Century. In a perfect world, this film would have revitalized the entire genre.

It helps having James Mangold behind the camera. Both technically skilled and an excellent storyteller, he knows his way around an action film (and a horse) without forsaking character dynamics. In this case, the adversarial relationship between struggling rancher Dan Evans (Christian Bale) and notorious outlaw Ben Wade (Russell Crowe) is the crux of the entire film.

Dan is a disabled war veteran and struggling rancher on the verge of losing his land to a greedy tycoon. Because he remains passive when threatened, he’s also lost the respect of his oldest son, William (Logan Lerman), who’s infatuated with the outlaw lifestyle. Meanwhile, Ben is captured after a deadly stagecoach robbery. With the rest of his gang ready to kill everyone and spring him, a posse is required to escort Ben to Bisbee, where a train will take him to Yuma to stand trial. Desperate for money - and perhaps to earn some respect - Dan agrees to join the posse for $200.

The journey comprises the bulk of the narrative, during which time we learn more about both men. Though Dan has good reasons for airing on the side of caution (especially where his family is concerned), his desperation slowly gives way to grim (and foolhardy?) determination, if only to regain his own sense of self-worth. Conversely, Ben is an intelligent, charming man who develops a liking - and respect - for Dan, eventually revealing a moral code of his own. The same can’t be said for his unnervingly ruthless right hand man, Charlie (Ben Foster).

While all the performances are good, Bale and Crowe really shine here, especially the latter. Despite playing a ruthless murderer, he has seldom been more likable. We also gotta give kudos to Foster, who’s truly terrifying, and the late, great Peter Fonda as a grisled old mercenary. Elsewhere, the action scenes are vivid, violent and brilliantly edited…a far cry from the days of Ford and Heflin, but fitting for the gritty tone. The climax, in particular, is a high tension masterpiece, which has Dan - with Ben in-tow - engaged in a running gunfight through Brisbee in a desperate attempt to reach the train. Released in an era when westerns were few and far between - and mostly revisionist in nature -  3:10 to Yuma was a breath of fresh air at the time…an old fashioned tale presented with skill and aplomb by remarkable talent on both sides of the camera.

So of course it’s worth owning. But keep in mind that not only was 3:10 to Yuma given a great looking 4K UHD release just a few years ago, it included the exact same bonus features listed below. This new SteelBook is strictly for the show-offs, and as such, it’s a great pick up. The case itself features suitably rustic new artwork, with a clear slipcover featuring the title, images from the film and the usual back-cover text info, making his a nifty piece of western feng shui.