MASSACRE AT CENTRAL HIGH : A Bit More Than Pure Exploitation 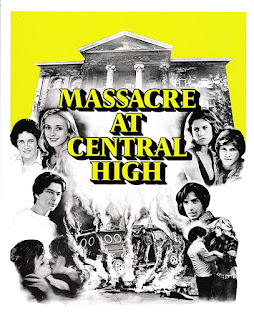 Massacre at Central High didn’t get a ton of attention when inauspiciously released back in ‘76, but eventually became a minor cult classic. Despite the lurid title, this isn’t really a horror movie and has a bit more to offer than just another body count. As many have since pointed-out, it was the Heathers of its day, minus the intentional humor, of course.

David (Derrel Maury) is the new kid at Central High, a school where a group of bullies terrorize the student body. Part of that group is Mark (Andrew Stevens), who initially tries to protect David because they’re old friends and David once saved his life. But David doesn’t really need protection because he’s not willing to take any shit from these guys. Following an incident in which ringleader Bruce (Ray Underwood) severely injures him, David seeks violent revenge, offing these guys in a variety of creative ways.

Though Mark is spared - for now - the reign of terror is over and David is seen as a hero and leader to the rest of the students (though he has no wish to be). But when they start behaving as badly as their former tormentors, David decides they need to die, too. With literally no adults around - throughout the entire movie! - nobody seems able to stop him.

The logic is sometimes laughable. Not only is David a high-tech demolition expert, the school remains open even after a half-dozen kids have died and bombs have repeatedly exploded around campus. But considering real life school tragedies that have occurred since the film’s initial release, the icy calculation of David’s rampage is kind of disturbing (improbable as it may be). Additionally, writer-director Rene Daalder delivers a film which suggests people are inherently cruel and, given the opportunity, would become the very thing they despise. And who knows…maybe he’s right.

Having such a theme to chew on elevates this a notch or two above typical exploitation films of the time. Still, one has to overlook the usual quota of B-movie amateurism to appreciate it, like pedestrian performances, clunky dialogue and some glaringly gratuitous sex & nudity (including a rape scene which even the victims blow off as no big deal). But as revenge films go, Massacre at Central High is pretty well made on a low budget, with lively death scenes. Though we may not want to admit it, there’s some satisfaction in seeing some of these characters get what’s coming to them.

“HELL IN THE HALLWAYS” - An excellent retrospective making-of documentary featuring most of the main cast.