The Strangeness of PREMAN: SILENT FURY 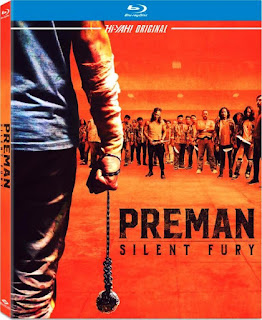 Strange movie, this one.

Not the story, mind you. In fact, Preman: Silent Fury boasts the type of solid, reliable plot on which many good action films are built. Khiva Iskak plays Sandi, a deafmute who works as a thug with the Preman, a group of Indonesian gangsters trying to rid an entire village of its inhabitants. He’s also widowed, trying to raise his impressionable young son, Pandu (Muzakki Ramdhan), and doing kind of a piss poor job of it. Still, his heart is in the right place.

Then Pandu witnesses the murder of a respected elderly villager at the hands of Shandi’s sadistic boss, Hanoeng (David Saragih). Sandi turns out to be a hell of a fighter, though, kicking the shit out of a half-dozen guys to escape with his son. The two go on the run, unable to rely on the police because they're all corrupt. Meanwhile, Hanoeng sends his crew to find and kill them. But since none match Sandi's skills - nor are they very bright - he’s forced to hire notorious hairdressing assassin, Ramon (Revaldo), who always refers to himself in the third person.

As the film’s best character, Ramon isn’t in it nearly enough, but his arrival and exit are indicative of the constantly shifting tone. Preman is - by turns - violent, gritty, absurd, goofy, surreal, harrowing, metaphoric, heartwarming and probably a few other adjectives I haven’t thought of. However, sometimes the themes and sequences sit uncomfortably next to each other. For example, Ramon is so damn funny that he’s almost endearing…at least until he slaughters an innocent family in his very next scene. And for what’s primarily supposed to be an action film, there are long stretches of family drama and flashbacks depicting how Sandi became a deafmute.

It’s the jarring shifts in tonal gears that make this a strange viewing experience, especially the scenes which delve into surrealism. Because it can’t quite stick with one mood very long, Preman moves in fits and starts. The fighting scenes are pretty good - Sandi's pretty handy with a flail - though sometimes a little haphazardly edited. Writer-director Randolph Zaini fares much better with dialogue and establishing his characters. Bolstered by good performances, Sandi and Pandu are engaging, with the former’s redemption being integral to the story. In addition to Ramon, some of the other quirky bad guys are pretty amusing, even those who ultimately end up as cannon fodder.

Though arguably trying to do too much in 90 minutes, Preman: Silent Fury is mostly pretty enjoyable. A lot of viewers might actually appreciate how all-over-the-place it is, which admittedly renders it a little different than your usual martial arts fight-fest. So while it’s structurally a little strange, at least it’s seldom boring.