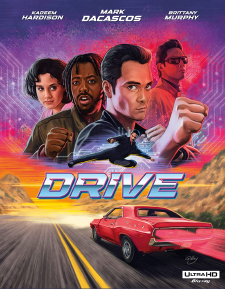 I went into 1997’s Drive with excess baggage…

Back in the day, my wife, girls and I would religiously gather in the living room each week to catch Iron Chef America, a cooking competition on Food Network. Hands down, our favorite fixture on the show was “The Chairman,” master of ceremonies at Kitchen Stadium. Not only did he enthusiastically announce each episode’s secret ingredient, he’d signify the start of the contest by shouting ‘Allez Cuisine!’ accompanied by a swift judo chop.

He was played by actor Mark Dacascos, and for years, that’s all he’s ever been to me. It wasn’t until much later that I began spotting him in action flicks, where he’d display pretty impressive martial arts prowess. But even while reviewing Drive, which he made long before Alton Brown ever heard of him, The Chairman loomed large. That’s my hang-up, I guess.

While he’s certainly no method actor who disappears into a role, Dacascos has an agreeable screen presence. Not only does Drive nicely showcase his physical skills, he’s capable of displaying a little intensity when required, as well as some comic timing (though he’s mostly straight man to co-star Kardeem Hardison). Mark plays Toby Wong, a Hong Kong agent whose strength and speed are boosted by a high-tech device implanted in his chest. But when China re-assumes control of Hong Kong, they want the device back, so Wong escapes to San Francisco.

Wong plans on selling the device to a buyer in Los Angeles, but he’s pursued by a bunch of hired killers led by Vic Madison (John Pyper-Ferguson). After a barroom brawl, he forces innocent bystander Malik Brody (Hardison) to drive him to LA. As a divorced, aspiring songwriter - but mostly kind of a slacker - Brody is an amusing character, the antithesis of Wong’s grim determination. What follows is a road trip where these two bicker, bond, fight bad guys and have run-ins with a variety of oddball characters. The trek culminates in a showdown between Wong and “Advanced Model” (Masaya Karo), another agent with an upgraded device in his chest.

In addition to featuring impressive action sequences for a low budget film, Drive is often pretty funny. Best of all, just the right measures of self-awareness are detectable during the more ridiculous moments. However, some secondary characters are poorly conceived. The late Brittany Murphy is wasted in a ridiculous role, as is the great James Shigeta; playing the head of the organization trying to take back the device, he isn’t given much to do besides stare at monitors and complain. As Madison, Ferguson is initially funny, but his sardonic hillbilly schtick eventually grows tiresome. I suppose these are minor quips, though, since Dacascos and Hardison display enough on-screen chemistry to compensate. One might even consider them to be Drive’s “secret ingredient,” elevating the film a notch or two above the usual direct-to-video fight-fests of the era. It’s also an interesting look at Dacasco’s career before taking up residence in Kitchen Stadium.

Now it’s offered on 4K UHD, which is sort of surprising since it’s a relatively obscure film that was just released on Blu-ray only last year (by MVD Visual). I can’t comment on the upgrade because I never viewed the Blu-ray, but the 4K picture & sound is pretty impressive. The bonus features, however, are exactly the same as the MVD disc.

“THE FORCE BEHIND THE STORM” - An enjoyable vintage documentary.