SNIPER: THE WHITE RAVEN: From Heartbreak to Headshots 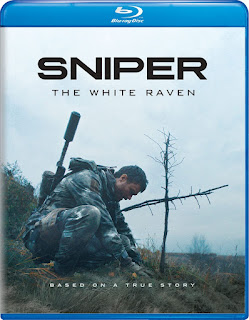 Rest assured, Sniper: The White Raven is not another entry in the endless Sniper franchise. Instead, this is a Ukrainian film that purports to be “based on a true story. ” How much of that claim is accurate doesn’t really matter. With the war between Russia and Ukraine still raging, this is about as timely as movies get, especially with recent reports of real-life snipers taking-out some of Putin’s higher-ups.

However, the film actually takes place in 2014 during the Russian occupation of Donbas. Mykola (Aldoshyn Pavlo) is a meek, eccentric college professor who lives a quiet life off-the-grid with his wife, Nastya (Maryna Koshkina). It’s a peaceful, hippy-like existence until a squad of Russian soldiers invade their isolated cottage. Suspecting Mykola of being a spy, they kill Nastya, burn down his home and leave him for dead. Left with nothing and vowing revenge, Mykola enlists in the military so he can fight back. Though the sudden change in lifestyle is difficult at first, Mykola becomes an excellent marksman - nicknamed Raven - and joins an elite group of snipers, whose job is to take-out specific targets. With his skills, he’s eventually tasked with finding and killing Russia’s most notorious sharpshooter.

Narratively, Sniper: The White Raven is sharply divided into two segments. The first half focuses on Mykola and Nastya’s relationship, lifestyle and tragedy. The second half shows us Mykola’s transformation into a cold, calculating killing machine. Both are a little meandering at times, but mostly maintain interest. For obvious reasons, the first half is calculated to instill emotional investment in the main character, which it does more-or-less successfully. Afterwards, however, the film simply becomes a series of missions and head-shots, with Mykola displaying little more than cold, gritty determination, so efficient at his job that the outcome is never in doubt. While watching him blast faceless foes is fun, there isn’t much in the way of suspense.Still, Mykola’s transformation from pacifist to killer is fairly compelling, featuring an understated performance from Pavlo. One might be inclined to take the “true story” claim with a grain of salt - especially since it follows the revenge movie playbook pretty closely - but current world events certainly add some urgency to the story. At the very least, Sniper: The White Raven beats enduring another Beckett family killfest.