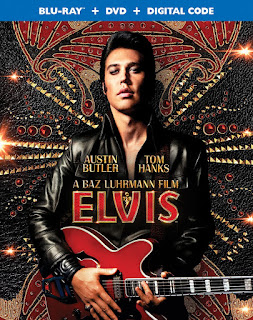 I never really liked Elvis, but man, this film was great.

Big, colorful, flamboyant and irresistibly fun, Elvis is more spectacle than traditional biography. Not that the film doesn’t (more or less) accurately chart Elvis Presley’s meteoric rise and depressing fall, but it’s done with such visual and sonic flair that it becomes just as much a celebration of director Baz Luhrman’s unique style as the King’s life & music. And since Presley’s life has already been well-documented in films and books - probably more than any music artist in history - why not elevate the whole thing to the level of Shakespearean tragedy? Who better to do that than Luhrman?

Like the best tragedies, our hero (Austin Butler, in a star-making performance) is on the path to greatness, but destined to pay for it with his life, either by his own doing or forces beyond his control. That force is the infamous Colonel Tom Parker (Tom Hanks), who also serves as the film’s (very) unreliable narrator. The relationship between these two is the crux of the entire narrative, and though Presley is certainly depicted as a flawed character, Parker is the film's unquestionable villain.

Whether or not Parker was truly as conniving, greedy and vile as the movie suggests doesn’t really matter. From a story standpoint, his self-serving omnipresence gives evil a face, which renders Elvis far more compelling than just another respectful chronicle of a career cut short. Both Hanks and his grotesque appearance are a little over the top, but there’s no denying he’s a morbidly fascinating character. That’s not to say Elvis himself is depicted as a mere victim, a symbol to be mourned yet again. He’s extremely likable, of course, not to mention naïve and easily manipulated. However, Elvis also gets caught up in his own stardom and all the trappings that come with it (though we’re certain Parker is primarily responsible for hastening his demise).

Butler only superficially resembles Elvis, which is actually a good thing. We don’t need yet-another uncanny impersonation, especially since Presley’s voice and mannerisms have long-since become objects of parody. In fact, with his jet-black hair, lanky frame and eye-liner in early scenes, there’s something almost gothic about his appearance. But since this was the era when Elvis was seen by conservatives as an evil, dangerous influence on America’s youth - and popularizing the “black” music that inspired him - the look perfectly conveys that forbidden fruit aspect of his appeal. While he does sound like the King, Butler’s interpretation allows us to look beyond the image. His performance might even be Oscar worthy.

Elsewhere, Buhrman emphasizes certain eras of Elvis’ life more than others, mirroring the highs and lows of the man’s real life career. Hence, the whirlwind success of his early days is given a lot more screen time than his entire decade-long movie career. Those sequences are thrilling, especially the numerous musical performances (by both Elvis and the black artists he admired). Buhrman gives these scenes the manic energy of a modern-day musical, along with the visual flourishes he’s known for. Though Elvis’ music is nothing I’ve personally chosen to throw on my turntable, how the songs are used in the context of the story is very effective, often exacerbating the tone of the scenes in which they’re heard.

Naturally, the second half of the film deals with more somber subjects…not just Elvis’ struggle to stay relevant in a changing musical landscape, but the social unrest of the late ‘60s, which certainly concerned Presley but Parker insisted on steering his career well clear of. It’s with no small amount of irony that the undisputed high point of Elvis’ post-Hollywood career was when he defied Parker to take creative control of his legendary 1968 TV special.

Throughout the film - almost constantly - is Elvis’ music, either performed by the King himself, Butler or modern artists interpreting some of his most enduring songs. Even a few of Elvis’ numbers are remixed for dramatic effect for certain scenes. Purists may balk at Buhrman messing with standards, to say nothing of including new songs in scenes taking place a half-century ago. Hearing Doja Cat usher-in Presley’s Vegas years is admittedly a little jarring. But again, this isn’t a biography in the purest sense. In addition to offering the King’s life as an epic tragedy with heroes and villains, Elvis is a celebration of his music and enduring influence. Presented with loads of panache, it’s a wildly entertaining and ultimately poignant film…for fans, non-fans and newcomers alike.

FEATURETTES - “Bigger Than Life: The Story of Elvis” (making-of); “Rock ‘n’ Roll Royalty: The Music and Artists Behind Elvis”; “Fit for a King: The Style of Elvis”; “Viva Australia: Recreating Iconic Locations for Elvis”