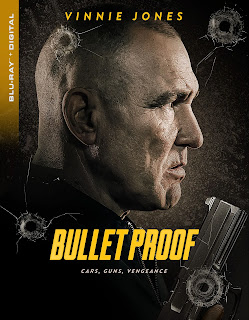 Be aware that Vinnie Jones is not the actual star of Bullet Proof, and unless you’re one of his relatives, that’s a good thing. The guy’s always been just too imposing to be a convincing leading man. And let’s face it, with his relatively limited range, he's better off playing thugs.

Fittingly, he’s the bad guy here, playing a vicious druglord named Temple. Glowring, seething and clenching his jaw hard enough to break granite, Jones looks like he’s having a good time, which means we’ll probably have a good time watching him. The real star - and director - is James Clayton as The Thief, who steals a cache of cash from Temple and escapes in one of his gang member’s cars. But stowed in the trunk is Temple’s pregnant wife, Mia (Lina Lecompte), caught trying to escape her abusive marriage.

With plans to rendezvous with a chartered plane to escape the country, The Thief initially wants to leave her behind, but reluctantly ends up helping her. It’s another one of those movie relationships that begin antagonistically before circumstances have them bonding. Meanwhile, Temple and his crew are hot on their tails, determined to retrieve the stolen money, take back Mia and kill The Thief.

As budget-conscious action flicks go, Bullet Proof ain’t bad. Though the story is predictable and contains more than its fair share of implausibilities, the action sequences are skillfully handled, even suspenseful from time to time. The overall performances are decent, as well. Clayton and Lecompte are an entertaining pair, instilling their thinly-drawn characters with enough likability that we’re sort-of invested in them. Vinnie Jones is…well, Vinnie Jones (which, again, is a good thing).

No one’s gonna walk away thinking they’ve seen a great film, but with tempered expectations, Bullet Proof is an agreeable way to kill 90 minutes. Bereft of surprises and never particularly memorable, it’s nevertheless fun in the moment…with Jones doing more of what he does best.