TIN CAN is Worth Opening 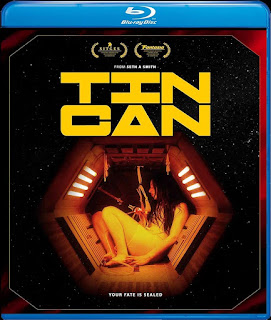 I’ve always enjoyed a good “trapped” film. You know, those which primarily take place in a single confined setting, with desperate characters whose only goal is to get out. I suppose Hitchcock’s Lifeboat is the granddaddy of them all, but beginning with 1997’s Cube, I’ve been particularly infatuated with the sci-fi-tinged variations, especially those which don’t spoon-feed the viewer a lot of upfront exposition…so we’re trying to figure out what the hell is going on - and why - right along with the characters.

It seems like there’s been a lot of these things popping up in the past decade or so, especially on streaming services. The great ones, such as Cube, Oxygen and The Platform, are conceptually intriguing examples of efficient storytelling and creative production design on a limited budget. Though it may take more than a single viewing to appreciate, Tin Can is another excellent trapped movie with a disturbing scenario.

There’s a nasty pandemic called the Coral virus that’s rapidly spreading throughout the population. Not exactly lethal, the disease slowly and methodically takes over the entire body, physically changing the subject into something decidedly not human. Lab researcher Fret (Anna Hopkins) discovers a cure, but before she can share her findings, she’s knocked out and taken away by a mysterious assailant. An unspecified amount of time later, Anna awakens inside a dimly-lit metal canister, hooked up to catheters, feeding tubes and IVs. Worse yet, there doesn’t seem to be a way to get out.

Anna eventually hears others who are similarly trapped, including estranged boyfriend John (Simon Mutabazi), co-worker Darcy (Amy Trefry) and angry, cantankerous Wayne (the always great Michael Ironside). Save for the occasional flashback, we hardly see the others. The first two acts are presented almost entirely from Anna’s point of view as the group tries to deal with their predicament, during which time the narrative slowly reveals what’s happening: The infected are placed in stasis in these canisters, either until a cure is found or they’re removed and disposed of. Anna, however, is not infected and begs to be released, mainly because she’s the only one who knows the cure.

To elaborate much further would be to ruin some of the nasty surprises in store, but I will say that the film does a tremendous job building dread, not just the implications suggested by the narrative - that the cure might be worse than the disease - but through claustrophobic atmosphere, grungy production design and some truly icky body horror. The story is often confusing - sometimes maddeningly ambiguous - but upon further reflection afterwards, the pieces actually fit together quite nicely. Whereas many “trapped” films tend to drop the ball with an underwhelming (or ridiculous) denouement, the payoff in this one is logical, plausible and wonderfully unnerving.

The narrative is a little draggy during the first act, but there’s more action in the film than its concept would suggest, especially once Anna attempts to take control of her dire circumstances. Featuring a solid performance by Hopkins under confined conditions, and a bit of timely social commentary thrown in for good measure, Tin Can is a dark, gruesome good time.