A FUGITIVE FROM THE PAST is a One-Movie Marathon 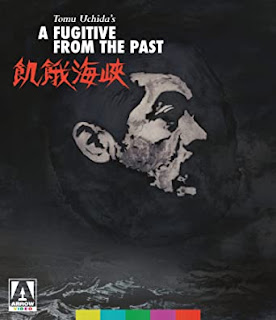 For some, A Fugitive from the Past is probably one of those films it’s easier to admire than enjoy. Not that it isn’t often fascinating, but at 183 minutes, it’s an exhausting one-movie marathon, especially considering the basic plot. And if you think the movie is long, its source novel, Kiga Kaikyo, is 1700 pages. So we should actually be grateful that director Tomu Uchida managed to be this concise.

Speaking of which, Tomu Uchida is no Akira Kurosawa, and by that I mean his work is not widely known on this side of the pond. In fact, this is the first time A Fugitive from the Past has ever been released on home video outside of Japan. But not only did Uchida have a lengthy career dating back to the silent era, this one is considered by some to be his magnum opus and one of the greatest Japanese films of all time. While I’m not sure I concur with the latter, it’s certainly a movie any self-respecting cinephile should see at least once before they die.

Despite the epic length, it is not an epic journey. On the surface, it’s a fairly straightforward story presented in three distinct acts. After robbing and killing a pawnbroker, Takichi Inukai (Rentaro Mikuni) and two partners escape on a small boat during a storm which sinks a ship. He apparently kills the other two, so when their bodies are discovered, authorities will think they’re one of the hundreds of ship passengers who perished. However, the police quickly determine the men were murdered ex-cons, leading to a manhunt headed by Yumisaka (Junzaburo Ban).

Though he’s able to follow Inukai’s trail, Yunisaka is not only one step behind, Inukai is aided by local prostitute Yae Sugito (Sachiko Hidari). Since he’s weary and starving, she takes him in and tends to his needs (in more ways than one). To show his gratitude, Inukai gives Yae enough money for her to start a new life in Tokyo. Meanwhile, Yunisaka’s obsession with catching Inukai ultimately ends his career.

Then the film takes an unexpected narrative turn with a middle act that focuses on Yae’s life after relocating to Tokyo. Though she tries to escape her old life, she ends up being a prostitute again, though making a lot more money and therefore happier. Yae has never forgotten Inukai’s generosity and dreams of thanking him in person one day. Ten years later, she gets her chance.

Spotting his picture in the paper - he’s now a wealthy businessman known as Kyoichiro Tarumi - she goes to his home. He claims not to know her, but not only is Yae obsessive, she is persistent. Inukai ends up killing her, as well as a servant who happens to enter the room. He quickly disposes of both bodies, which the police discover and initially assume is a mutual suicide. However, it isn’t long before the police, led by Detective Ajimura (Ken Takakura), begin to suspect Inukai/Turami, and after coaxing Yunisaka out of retirement, Ajimura is able to make the connection between Yae’s murder and the robbery a decade earlier.

As a police procedural, A Fugitive from the Past is very engaging, especially during the initial manhunt. What makes it interesting is that Inukai doesn’t really do anything particularly smart to elude the police. Conversely, Yunisaka is incredibly intuitive and intelligent…it’s just a turn of fate that torpedoed his career. While I appreciate what Uchida’s trying to do with the second act, Yae’s portion of the story is far less compelling…and pretty pokey, at times. However, I suppose it’s necessary, since her death has more impact on the viewer and sets the stage for the second investigation (which reclaims the urgency established in the first hour).

Could the same story have been told in two hours? Probably, but one can argue it wouldn’t have been as immersive, nor could there be much room for social commentary and themes of karma, redemption and guilt (to name a few). Uchida juggles his ideas and characters extremely well, working with a story that’s apparently atypical of the types of films he was known for at the time. He’s aided considerably by excellent performances - Mikuni, in particular - and stark black & white cinematography that reflects a film noir influence, appropriate for the somber tone.

Speaking of which…though interesting, A Fugitive from the Past isn’t what anyone would consider a “fun” film. It does test the viewer’s patience at times, especially since the denouement is practically a forgone conclusion. And considering its length, the film’s unexpectedly abrupt climax - if you can even call it that - is pretty jarring. I can imagine a lot of neophytes thinking, “Well, that was much ado about nothing.”  But as someone new to Uchida, I don't know how often I’d feel compelled to revisit this one, but was intrigued enough to seek out some of his other films.

INTRODUCTION - At nearly 30 minutes, this is more like an appreciation by writer Jasper Sharp.