POLTERGEIST and THE LOST BOYS: Two Decade-Defining Classics in 4K 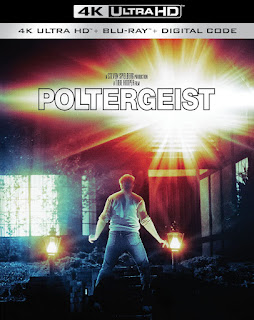 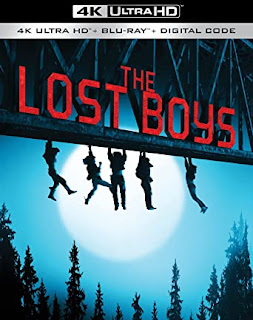 Not only are they modern classics, Poltergeist and The Lost Boys had a significant cultural impact in a decade when horror was mostly defined by slasher films. They were comparative anomalies in the genre: Two movies aimed at a wide audience - practically family friendly - that still delivered in the thrill department. Now both have been given the well-deserved 4K treatment. No new bonus features are included, but the video/audio upgrades are outstanding.

Despite being released with a PG rating at a time when nearly all horror movies were rated R, Poltergeist scared the hell out of everybody in the summer of ‘82. Anyone claiming otherwise was simply lying. And that PG rating didn’t stop Tobe Hooper & Steven Spielberg from showing a guy rip his own face from his skull in lurid, lingering detail! How’d they get away with that? However, the most amazing aspect of the film was that it managed to scare the bejeezus out of an entire generation - exploiting some of our most common fears along the way - without killing a single character. One of the scariest movies of all time had a total body count of zero.

For many growing up back then, Poltergeist has since become the perfect gateway drug to introduce their own kids to the visceral joys of horror, probably a big reason why its popularity endures while most slashers of the era have been forgotten by all but nostalgic gorehounds. Some of the Spielbergian touches and special effects haven’t aged all that well - the face-ripping scene looks laughably phony - but its power to scare newbies is undiminished. From a historical perspective, Poltergeist is arguably one of the greatest haunted house films ever made and still a hell of a lot of fun.

While the 4K disc looks and sounds awesome, the accompanying Blu-ray also been given a new transfer, meaning that this one might be worth the upgrade regardless of your preferred format. Other than a digital copy, all the bonus features are carried over from other releases, none of which are very substantial.

FEATURETTES - “They Are Here: The Real World of the Poltergeists” (a 2007 doc about people who investigate the paranormal for a living, but has little to do with the actual movie); “The Making of Poltergeist” (vintage featurette).

The Lost Boys is a comedic vampire tale with villains infinitely cooler than its heroes, sporting trenchcoats, tons of bling, leather, spandex and totally rockin’ mullets. There must be more mullets on display here than at a Bon Jovi concert.

The Lost Boys has maintained a pretty large fanbase over the years and remains revered by those who grew up with it. The film is genuinely funny and loaded with some great one-liners ("You're a creature of the night, Michael...wait until Mom finds out!"). It also features terrific performances by its young cast. Some, like Kiefer Sutherland, Jami Gertz and Alex Winter (Bill & Ted's Excellent Adventure) would go on to bigger things. For others, The Lost Boys would be the high point of their careers.

Though certainly a product of its time - often amusingly so - the most enduring aspect of The Lost Boys would be its lasting impact on how vampires are depicted in both movies and television, from Buffy, the Vampire Slayer to the Twilight series, True Blood to The Vampire Diaries. No longer monsters - or even villains, in some cases - contemporary creatures of the night may not be sporting trenchcoats or rockstar hair, but they're nearly always young, sexy and have exemplary fashion sense. So while The Lost Boys probably doesn’t rank among the greatest vampire films ever made, a strong case could be made that, aesthetically, it might be one of the most influential. Not bad for something originally conceived as a children’s movie.

Like Poltergeist, this one features great new transfers for both 4K and Blu-ray, making it worth the upgrade for videophiles. The bonus features are also carried over from previous releases, but unlike those included with Poltergeist, they’re substantial and entertaining. In fact, The Lost Boys’ back-story is just as interesting as the movie itself.

FEATURETTES - “The Lost Boys: A Retrospective” (an excellent 20-minute look back, with cast & crew interviews); “Vamping Out: The Undead Creations of Greg Cannom”; “Haimster & Feldog: A Tale of Two Coreys”; “A World of Vampires” (a history of vampire lore around the world)

“INSIDE THE VAMPIRE’S CAVE” - Multi-part making-of doc, with interviews with various cast & crew.

MUSIC VIDEO - “Lost in the Shadows”