MINIONS: THE RISE OF GRU Knows Its Audience 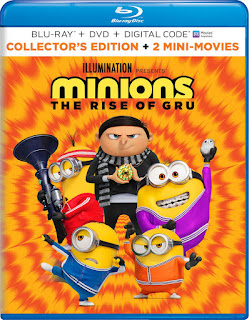 MINIONS: THE RISE OF GRU (Blu-ray Review)
2022 / 87 min
FROM UNIVERSAL
Review by Stinky the Destroyer😼

Apparently, the iron is still hot.

For those who still can’t get enough of those insanely popular Tic-Tac shaped henchmen, here’s more of the same. A sequel to 2015’s Minions, which itself served as both a spin-off and a prequel to the Despicable Me films, Minions: The Rise of Gru definitely preaches to the converted. No one else need apply.

This one takes place in 1976, when Gru is still an impressionable boy with dreams of being a supervillain like his hero, Wild Knuckles, leader of the world-famous crime crew, the Vicious 6. Gru has-since hired the Minions to work for him, mostly maintaining his secret hide-out under the house.

Wild Knuckles steals a medallion called the Zodiac Stone, which has special powers for which he has nefarious plans. However, he’s betrayed by the rest of the gang - led by Belle Bottom - who take the stone for themselves and leave him for dead. Later, after being belittled during a job interview for the vacant Vicious 6 position, Gru steals the stone and entrusts Otto to take it back to his lair. Instead, Otto trades it for a pet rock, resulting in Gru firing all the minions. The rest of the story involves the minions and the Vicious 6 trying to get the stone first, while Gru begins to bond with his hero.

The plot, of course, is perfunctory. Gru figures more into the story than the previous Minions film, but the little yellow fellows are still the primary focus. In general, their antics are amusing (occasionally endearing) without ever being laugh-out-loud funny. Obviously, results may vary. Fans will undoubtedly get a kick out of every Minion moment. Others will concur that these guys wore out their welcome three movies, a hundred memes and countless tie-in products ago.

It goes without saying that The Rise of Gru will appeal primarily to kids, but like Minions, this one has some fun with the decade in which it takes place. Numerous styles, pop culture references and slang terms from the era should amuse the older folks, as will the impressive line-up of voice talent. Steve Carell & Pierre Coffin return as Gru and the Minions, while the likes of Taraji B. Henson, Michelle Yoah, Alan Arkin, RZA, Jean-Claude Van Damme, Lucy Lawless, Julie Andrews, Dolph Lundgren and Danny Trejo make up the huge celebrity supporting cast. Sure, some of their roles are gratuitous, but it’s nevertheless fun picking-out famous voices not typically associated with animation.

Minions: The Rise of Gru doesn’t reinvent the wheel, but since it raked in gajillions during its theatrical run and the franchise shows no signs of slowing down, it doesn't really need to. As a film that meets expectations without ever exceeding them, fans of the long running franchise will have no complaints. Everyone else should ask themselves why they’re still reading this.

“HOW TO DRAW (& ANIMATE) WITH BRAD ABLESON” - The co-director shows how to draw a Minion, Gru and Stuart.

“LAIR FLAIR: MAKE YOUR OWN MINION HIDEOUT” - Essentially a montage of the hide-out beneath Gru’s room.