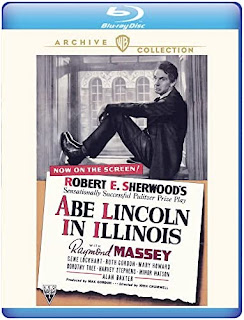 Raymond Massey was pretty much in the Abraham Lincoln business, not only playing him in Abe Lincoln in Illinois on both stage and screen, but several TV programs and at least one other high profile movie (How the West was Won). You might say Massey was to our 16th president what Bela Legosi was to vampires. Sure, he’s done a lot of other stuff, but hey, when you’ve found your niche, why not exploit it whenever the opportunity arises?

Massey is almost the whole show here, and the main reason the film remains watchable. He uncannily resembles Lincoln and instills the character with the folksy, philosophical charm we typically associate with the man. You’d be hard pressed to name any other actor who more convincingly embodied an American president…including Daniel Day-Lewis.

But as presented in Abe Lincoln in Illinois, the man’s story isn’t quite as compelling. Not an encompassing biography, the film dutifully chronicles Lincoln’s rise from lowly backwoods shopkeeper to winning the presidency, ending on an ominous note with a final scene of Abe reluctantly boarding the train that’ll take him to Washington. In between are the highlights of his political career, with a few asides to explore his relationships with Ann Rutledge (Mary Howard), who was supposedly his first love, and soon-to-be First Lady Mary Todd (Ruth Gordon). The latter comes across as a little self-serving - maybe even unlikable - but she does provide welcome moments of emotional tension to the narrative.

Ultimately though, this plays sort of like a Cliff’s Notes summary of events that have been well documented. Not only that, Lincoln is depicted as so noble, saintly and above reproach that - despite Massey’s masterful performance - he becomes more of a symbol than a dynamic character. In fact, that final shot practically paints him as a Christ-like figure ready to die for our sins. Hyperbole notwithstanding, though, Abe Lincoln in Illinois remains an enjoyable history lesson that only hard-core cynics could dismiss entirely. Just don't expect any revelations or dramatic fireworks.