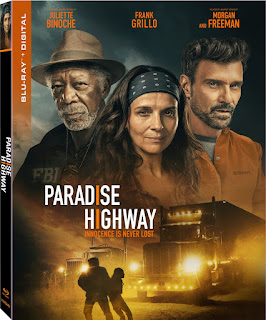 Sally (Juliette Binoche) is a lonely middle-aged trucker who sometimes engages in illegal smuggling to protect her incarcerated brother, Dennis (Frank Grillo). Just prior to his release, she agrees to one more job. When the cargo turns out to be a 13 year old girl being sold by human traffickers, she refuses, at least until they threaten her brother’s safety.

At the drop-off point, the girl, Leila (Hala Finley), finds Sally’s shotgun and shoots the buyer. They immediately flee the scene, with Sally unsure what to do next. Not only has she - and Dennis - run afoul of the traffickers, surly retired FBI agent Gerick (Morgan Freeman) and wet-behind-the-ears partner Finley are now investigating the murder.

You can probably figure out what happens next. Sally’s maternal instincts kick in, bonding with Leila while (improbably) evading criminals and cops. Elsewhere, Freeman’s character is yet another older, wiser mentor - perhaps a little grumpier - while Grillo once-again plays a hunky scumbag. Since neither are really stretching themselves, we kinda know what their characters are gonna do. I suppose the biggest casting surprise might be Binoche, who doesn’t usually appear in stuff like this. She's good, but not remarkable.

The story itself moves in fits and starts. Relatively light on action, there are slow stretches which might test the viewer’s patience, such as a lengthy truck-stop stay-over during the middle act that ultimately serves as a chance for everyone to (equally improbably) catch up with our protagonists. And considering the grim subject matter, the film only superficially addresses the atrocity of human trafficking. Most conflicts and complications are wrapped up a little too neatly to be convincing.

Still, the developing friendship between Sally and Leila has enough charming moments to generate some suspense whenever they’re put in harm’s way. And even though he can do these roles in his sleep, Freeman’s condescending treatment of Finlay is sometimes amusing. For her first feature film, writer-director Anna Gutto’s heart is certainly in the right place, but while Paradise Highway is watchable, it’s never as compelling or thought provoking as a topic like this demands.