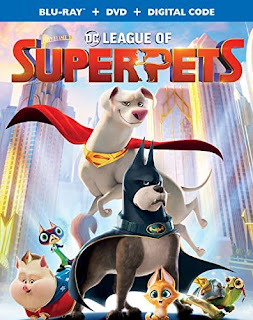 It’s sort of ironic that, even though they’re just secondary characters, Batman and Superman are a lot more fun in DC League of Super-Pets than any film in the so-called Snyderverse. For some, that may be faint praise, but this film does give their iconic personas some good-natured ribbing, especially Batman. As voiced by Keanu Reeves, I wouldn’t mind seeing a spin-off featuring just him, since he's not in this film nearly enough.

The title tells all…DC League of Super-Pets is an origin story, of sorts, with the Man of Steel fighting crime and saving lives alongside Krypto, his loyal dog who arrived here from Krypton with him. Somewhat cheekily, it looks like Krypto does most of the hard work. Still, they’re best buds, at least until Lois Lane’s increasing presence makes Krypto feel left out.

Meanwhile Lex Luthor tries to nab a meteor made of Orange Kryptonite. It’s supposed to give him powers equal to Superman’s, but turns out to have no effect on humans. However, it does boost Lulu, a hairless pet store guinea pig that used to be one of Luthor’s lab animals. She uses her powers to imprison the entire Justice League, while tricking Krypto into eating Green Kryptonite by hiding it inside a piece of cheese. Now powerless, he enlists the help of other animals from the same pet store: cynical boxer Ace, hero-worshipping pig PB, insecure squirrel Chip and near-sighted turtle Merton. They, too, have been affected by Orange Kryptonite, but struggle to control their new abilities.

Together, they set-out to rescue the Justice League, but not before the usual getting-to-know-you period, where these animals squabble, trade insults, express their insecurities, have epiphanies and ultimately become a team. Unsurprisingly, much of the focus is on the relationship between Ace and Krypto, but the other critters have their share of amusing moments. Actually, amusing best describes the entire movie…seldom uproarious, but congenial and fun, especially for kids. Still, there are enough clever Easter Eggs, throw-away gags and satiric moments to keep the older folks entertained (for at least one viewing, anyway).

Typical of most modern animated films, an all-star cast provides the voices, including Dwayne Johnson, Kevin Hart, Kate McKinnon, John Krasinski, Diego Luna. However, this ain’t gratuitous stunt casting. Each actor effectively serves their characters. Even Hart - who normally can’t stop being Kevin Hart long enough for us to forget him - is surprisingly understated, which is appropriate for Ace’s demeanor. However, it’s Reeve’s Batman who steals every scene he’s in.

Boosted by colorful CG animation and a surprisingly sweet-natured - albeit predictable - story, DC League of Super-Pets will amuse its intended audience. Be advised, however, that the film’s funniest laugh-out-loud moment comes after the end credits, so stay tuned.

FEATURETTES - “How to Draw Krypto”; “Behind the Super Voices”; “Super-Pets Animation 101”; “The World of Super-Pets”; “Find the Easter Eggs” (of course).