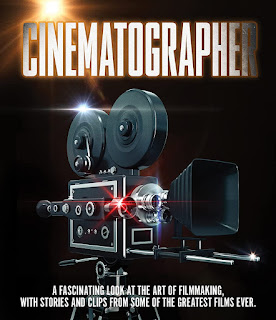 Bear in mind that Cinematographer isn’t really an encompassing documentary about “the art of filmmaking” as touted on the cover. Nor is it a retrospective of the history of cinematography.

In fact, the film is mostly about one guy: Donald M. Morgan, a longtime director of photography and cameraman with a prolific career in both movies and television. Some of the best-known films he worked on include Christine, Starman, Used Cars, Seven, 1941 and a slew of TV productions. However, this is only partially about his time behind the camera.

While Morgan himself has a lot of entertaining anecdotes about his job - including how he stumbled into the business before he really even knew what he was doing - a good portion of the film focuses on his recovery from alcoholism. Not only that, he used his struggle to inspire friends and associates to battle their own chemical demons, as confirmed through numerous interviews with those who know him well.

Everyone interviewed has nothing but gushing praise for the man, both as a cinematographer and a friend. Indeed, Morgan himself comes across as a generous, congenial guy who’s been around the block more than a few times, but can be amusingly cantankerous when it comes to the job. The film also features clips from many of his films, as well as a few from his peers. But while we learn a lot about Morgan’s inspiration to others - professionally and personally - the film doesn’t have much to offer about the art of cinematography itself, nor does it effectively convey what makes his work distinctive from countless others in the same profession. Film lovers expecting to learn more about the craft are apt to be disappointed. However, if you just want to meet a nice guy from the movie business who successfully conquered his demons, Cinematographer is fairly enjoyable.