Pick Up THE BLACK PHONE 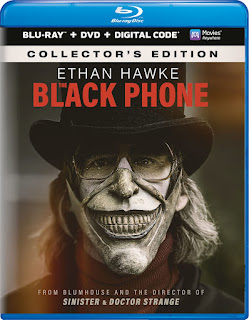 In this case, the apple certainly doesn’t fall far from the tree. The Black Phone is based on a story by Joe Hill - Stephen King’s son - and bears quite a few similarities to some of Dad’s work.

Taking place in 1978, the story involves the disappearances of several kids in a Colorado suburb at the hands of “The Grabber” (Ethan Hawke), who drives around in a balloon-filled black van to abduct his victims. Throughout the film, his face is partially or completely hidden by a series of creepy metallic-looking masks (and it’s a safe bet you’ll see them for sale at Spirit Halloween this year). Hawke turns in a great performance, relying mostly on his eyes and voice to creep us out.

Like some of King’s most beloved stories (and the films adapted from them), the protagonists are children…siblings Finney (Mason Thames) and Gwen (Madeleine McGraw), who live with an abusive, alcoholic father. Finney is timid and bullied in school, while Gwen is a little more defiant. When kids begin disappearing, she also has the unique ability to see what’s happened to them in her dreams.

The Grabber abducts Finney and imprisons him in a dark, sound-proofed basement, periodically coming down to torment him, sometimes intentionally leaving the door unlocked so he can punish him for trying to escape (part of the Grabber’s sadistic game). But when he’s alone, Finney gets calls from a broken black telephone attached to the wall. The callers are the Grabber’s recent victims, who warn him that he’ll die horribly if he doesn’t find a way out. Each was murdered before they could escape themselves, so they pass-on what they learned about the basement - and their killer - to Finney. Meanwhile, Gwen tries to find him through her dreams, a skill her late mother once claimed to have (though Dad insists it drove her to suicide).

“Gifted” kids, outcasts, bullies, balloons, an abusive home, indifferent or ineffective adults, the period setting, terror in a small town…sounds like half of King’s bibliography, if you ask me. Still, The Black Phone takes those elements and spins them into a dark, compelling psychological horror tale with supernatural elements. There’s a bleak aesthetic to nearly every scene that’s almost oppressive, exacerbating the tone (the use of Super 8 for certain scenes is particularly effective). The film is seldom all that scary, but the dread is almost constant, and because the premise centers around the murder of children, this could tough sledding for some viewers. By this time, however, we’re too invested in Finney and Gwen to give up on them. Hawke and the Grabber may be the film’s centerpiece - at least in the promotional campaign - but the movie belongs to the kids, who are engaging, sympathetic and perfectly played by Thames and McGraw.

Other than a few lapses in plausibility and one or two needlessly stupid supporting characters (i.e. Max), The Black Phone is smart, suspenseful and culminates in a nerve-wracking climax. This might be the best Stephen King movie that King himself had nothing to do with.

FEATURETTES - “Answering the Call:Behind the Scenes of The Black Phone”; “Ethan Hawke’s Evil Turn”; “Devil in the Design”; “Super 8 Set”