THE BURNED BARNS and SYMPHONY FOR A MASSACRE: Two Restored French Thrillers 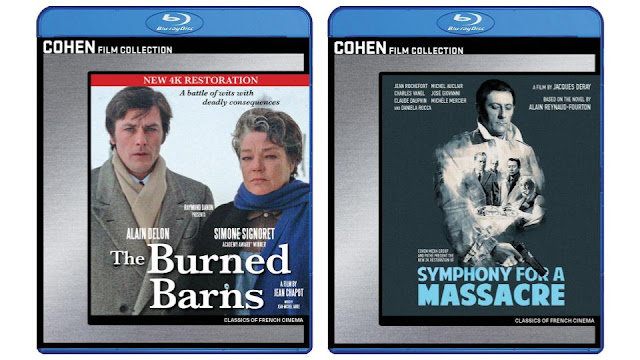 THE BURNED BARNS and SYMPHONY FOR A MASSACRE (Blu-ray Review)
FROM COHEN MEDIA GROUP
Review by Mr. Paws😺

Cohen Media has unearthed a couple of classic French thrillers well worth checking out. One of them pairs two acting legends, while the other is a forgotten gem that - surprisingly - is one of the best films this writer has reviewed this year.

Just outside a small French village near the Cateux family farm, a young woman is found murdered. Judge Peirre Larcher (Alain Delon) is brought in to head the investigation. He immediately inquires if the Cateux family knows more about that night than they’re leading on. Still, matriarch Rose (Simone Signoret) is congenial and cooperative. She’s also highly respected throughout town and Larcher grows to admire her as well. But when it appears that one of her sons may have committed this brutal crime, tension within the family - which has been brewing long before the murder - reveals itself.

The Burned Barns makes great use of its rustic, snowy setting, immediately establishing a melancholy tone that reflects the family’s overall unhappiness. But while the story initially unfolds like a whodunit, the crux of the film is the relationship between Rose and Larcher. There’s mutual respect - even affection - but they’re definitely at-odds, which creates an intriguing dichotomy in the many scenes they share. Delon is good, effectively conveying Larcher’s “outsider” status and the remorse he feels in subjecting Rose to incessant questioning. However, the movie belongs to Signoret, often accomplishing more with a gesture or expression than a mouthful of dialogue. A little too deliberately paced at times, with an anti-climactic conclusion, The Burned Barns is nevertheless an interesting study of a family unraveling at the seams.

EXTRA KIBBLES: INTERVIEW WITH CREW - Most of them concur that Alain Delon was kind of a dick, especially toward director Jean Chapot. In other words, this is juicy stuff.

SYMPHONY FOR A MASSACRE

Five shady businessmen decide to pool their resources for a major drug purchase that could reap millions. The plan goes awry when one of them, Jabake (Jean Rochefort), decides he’d rather keep all that money for himself. He devises a fiendishly clever & elaborate plan to steal it back from their courier in-transit. However, his plans threaten to go haywire after being forced to kill the courier. The group begin to suspect each other, while Jahake is forced to commit more murder to cover his tracks when some of them find holes in his ruse.

Ingeniously plotted with deft film-noir touches, Symphony for a Massacre is damn-near note-perfect, from the characters & performances to the tight-pacing & unusual music score. It’s a classic case of bad guys vs. worse guys, with Jahake as its morbidly compelling centerpiece. He’s arrogant, unlikable, conniving and cold-blooded, yet even though we despise him, we’re invested in his plan…perhaps because it took so much meticulous work to set into motion.

Rescued from obscurity, Symphony for a Massacre is a knock-out thriller that deserves to be rediscovered by a new audience. Unpredictable, fast-paced and consistently engaging, it compares favorably to any French crime film you’d care to name, from any era.

EXTRA KIBBLES: “THE SCORE” - Not actually about the music, this is a retrospective analysis of the film and director Jacques Deray; Re-release trailer.