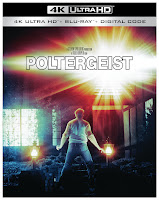 🙀POLTERGEIST arrives on 4K Ultra HD and Digital 9/13 from Warner Bros.
Poltergeist, the 1982 classic horror film written by Steven Spielberg and directed by Tobe Hooper, will be released on Ultra HD Blu-ray Combo Pack and Digital on September 20, it was announced by Warner Bros. Home Entertainment. Suburbanites Steve (Nelson) and Diane (Williams) suddenly experience paranormal activity in their home. What starts off as minor excitement quickly turns into nasty ghostly encounters. The disappearance of their daughter Carol Anne (O’Rourke) forces the Freelings to bring in parapsychologists and a professional exorcist to exorcise their home. Directed by Tobe Hooper, produced by Frank Marshall and Spielberg and featuring Oscar Nominated Visual Effects by Richard Edlund, Michael Wood and Bruce Nicholson, Poltergeist is one of the most entertaining horror films of its time. 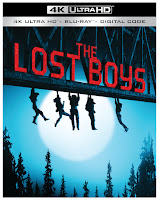 😺THE LOST BOYS arrive on 4K Ultra HD and Digital 9/20 from Warner Bros.
The Lost Boys, directed by Joel Schumacher and starring Kiefer Sutherland, Jason Patric, Corey Haim and Corey Feldman, will be released on Ultra HD Blu-ray Combo Pack and Digital on September 20, it was announced by Warner Bros. Home Entertainment.When their parents’ divorce, Michael (Jason Patric) and Sam Emerson (Corey Haim) move with their mother to their grandfather’s house in a California town nicknamed, “The Murder Capital of the World.” Soon after arriving, Michael gets involved with a hell-raising motorcycle gang of vampires with a charismatic leader (Kiefer Sutherland).  When Sam becomes involved with the Frog Brothers (Corey Feldman and Jamison Newlander), who confess to being undercover Vampire hunters, he realizes it’s up to them to save Michael and the rest of the town from the vampire gang. The Lost Boys cast also includes Jami Gertz, Edward Herrmann, Barnard Hughes, Dianne Wiest and Alex Winter. The film’s screenplay was written by Janice Fischer & James Jeremias and Jeffrey Boam from a story by Fischer & Jeremias.  The film was produced by Harvey Bernhard. Richard Donner served as executive producer. 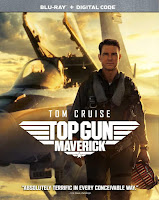 ✈TOP GUN: MAVERICK on Digital 8/23 and 4K/Blu-ray 11/1 from Paramount
After more than 30 years of service as a top naval aviator, Pete “Maverick” Mitchell (Tom Cruise) is where he belongs, pushing the envelope as a courageous test pilot. Yet, Maverick must confront the ghosts of his past when he returns to TOP GUN to train a group of elite graduates and comes face-to-face with Lt. Bradshaw (Miles Teller), the son of his former wingman, "Goose". Bitter rivalries ignite as the pilots prepare for a specialized mission, which will require the ultimate sacrifice from those chosen to fly it. TOP GUN: MAVERICK is the #1 film of 2022 with over $1.3 billion in worldwide box office and the highest grossing film of the producer/actor Tom Cruise’s acclaimed career.  Hailed as “spectacular” (Brian Truitt, USA Today), “breathtaking” (Don Kaye, Den of Geek) and “jaw-dropping” (Sean O’Connell, Cinemablend) TOP GUN: MAVERICK lands on Digital August 23, 2022 and on 4K Ultra HD, Blu-ray, and DVD November 1 from Paramount Home Entertainment. 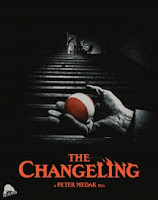 🙀THE CHANGELING ON 4K UHD on 10/25 from Severin Films.
THREE-DISC COLLECTION INCLUDES NEW 4K SCAN + BLU-RAY WITH NEW SPECIAL FEATURES AND SOUNDTRACK CD. It has been called "remarkable" (Paste Magazine), "utterly terrifying" (Mondo Digital) and "a ghost story guaranteed to freeze the blood" (Gannett). Now this "masterpiece of terror" (Reel Reviews) from director Peter Medak (THE RULING CLASS) comes to UHD like you've never seen, heard or experienced it before: Academy Award® winner George C. Scott gives "one of his greatest performances ever" (Bloody Good Horror) as a grieving music professor tormented by a paranormal horror that includes "the best séance in horror movie history" (Newsweek). Trish Van Devere (THE HEARSE), two-time Oscar® winner Melvyn Douglas (THE TENANT) and Jean Marsh (FRENZY) co-star in "one of the most terrifying horror films of all time" (DVD Beaver), now scanned in 4K from the internegative with 4½ hours of Special Features - including revealing new interviews with Medak - plus a soundtrack CD and more. 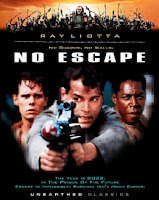 😺The Late, Great Ray Liotta in NO ESCAPE, on Blu-ray for the first time on 10/11 from Unearthed Films.
The Year is 2022. John Robbins (Ray Liotta), a former Marine Captain, has been sentenced for assassinating his commanding officer and is banished to a secret and remote prison island run by The Warden (Michael Lerner). In this prison of the future, inhabited by society's most violent and feared criminals, Robbins is left to the mercy of the elements and his fellow man. He finds the island divided into two camps: The Outsiders, led by the brutal and bloodthirsty Marek (Stuart Wilson); and The Insiders, led by the strong-willed, benevolent Father (Lance Henriksen) and his followers Hankins (Ernie Hudson) and Casey (Kevin Dillon). Robbins doesn't care to join either - his one aim is to break free of an island from which there is no escape. To aid him, he steals a powerful and destructive weapon from The Outsiders, sparking off a major war between the two encampments. Now bloody battle and the brutality of hand-to-hand combat will take many lives before Robbins can think of freedom again. Trapped on an island where nature can be as deadly as man, there is only one thought which keeps Robbins alive... escape...escape...escape.
Posted by D.M. Anderson at 9:45 AM