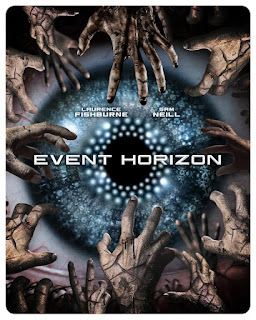 Event Horizon is another one of those films that came & went with a whimper when first released, but earned a pretty huge fanbase since, not-to-mention a considerable amount of critical respect (for a Paul W.S. Anderson film, anyway). Today, it’s a cult classic, as numerous re-releases and special editions on DVD & Blu-ray will confirm. In fact, the film has been pretty nicely represented on home video over the years.

The 25th Anniversary release of Event Horizon doesn’t include any new bonus features (unless you’re counting the digital copy). While there are still a bounty of outstanding extras, they’re the same that have been included with most previous Paramount releases. It also lacks the handful of Zoom interviews created for last year’s Collector’s Series Blu-ray from Shout Factory (though to be honest, those were all pretty short and comparatively redundant). If you like the film, any one of those older - and cheaper - releases will do just fine.

But if you love Event Horizon, it is a must-see in 4K. The film was always aesthetically striking - I especially like the sparse-but-effective use of greens and blues to contrast the darkness of space and the ship interiors - but it’s even more vivid in UHD, as is the overall clarity and sharpness, revealing details and texture that weren't as noticeable on older releases. Conversely though, it features the same audio track as the Blu-ray, which is good but not exemplary. 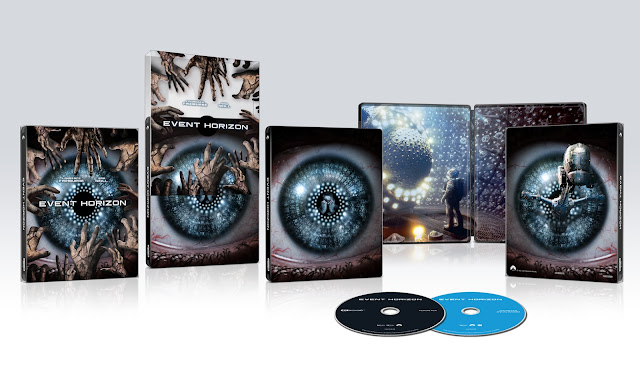 Speaking of aesthetics, the 25th Anniversary SteelBook features some amazing artwork, on both the case itself and the transparent plastic slipcover. Combined, they make the type of picture you might see on a ‘90s-era heavy metal album cover, definitely representative of the tone and themes of the movie. SteelBooks, of course, are intended for collectors who like to show off, and as these things go, this is one of the cooler ones.

The movie itself has aged pretty well, though 2015 came & went without any moon colonies (and it doesn’t look like we’re gonna make that 2032 Mars deadline, either). But in 2047, the rescue ship, Lewis & Clark, ventures out to Neptune to investigate the reappearance of the Event Horizon. The ship was built to create its own black holes in order to instantly visit distant stars, but inexplicably disappeared seven years earlier. Accompanying the crew is the ship’s designer, Martin Weir (Sam Neill), who’s obsessed with finding out where it’s been. None of the other crew, especially Captain Miller (Laurence Fishburne), care about that; they just want to rescue survivors and get the hell back home. There are no survivors, however, and the ship itself, having returned from a different dimension (presumably Hell), is now a living, evil entity that wants to take the Lewis & Clark crew back with it.

Like many others at the time, I was initially underwhelmed, finding the narrative somewhat simplistic, disjointed and ambiguous. However, there was something about its Solaris-on-acid concept that stuck with me. Subsequent viewings revealed that what Event Horizon lacks in narrative cohesion is compensated by the tone, which establishes a deep sense of dread in the very first scene and maintains it throughout. The Event Horizon itself is an ominously creepy ship and becomes a character in its own right, just like the Overlook Hotel in The Shining (to which Event Horizon has sometimes been compared). It is also one of the few sci-fi films that makes space seem like a shitty place, especially since the crew of the Lewis & Clark have traveled way too far into the outer reaches of our solar system for their own good. Paul W.S. Anderson has never been what anyone would mistake for a great director, but after further consideration, he really hit it out of the park with this one.

How a movie makes you feel ultimately matters more than narrative complexity, plausible science or stimulating the intellect. Event Horizon ain’t a perfect film, but as a visceral experience, it remains undeniably effective. An inarguable cult classic, this 25th Anniversary SteelBook is a great looking souvenir - inside and out - for those who love the film.

4K, BLU-RAY & DIGITAL COPIES - All bonus features are on the Blu-ray disc, which are identical to previous Paramount & Shout Factory releases.

“THE MAKING OF EVENT HORIZON” - An extensive feature-length doc divided into five chapters. Featuring numerous interviews and anecdotes - mostly from director Paul W.S. Anderson, actor Jason  Isaacs and producer Jeremy Bolt - just about every aspect of the production is thoroughly covered. Say what you will about the movie itself, this is one of the best bonus features ever dedicated to a single film.

“THE POINT OF NO RETURN: THE FILMING OF EVENT HORIZON” - More scene-specific details from Paul W.S. Anderson.