RAIDERS OF THE LOST ARK (4K SteelBook): Because Not Everyone is a Completist 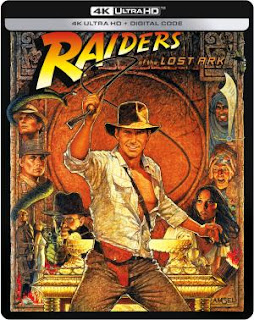 Not everyone is a completist. Not everyone is compelled to own every film in a franchise simply because it exists. Case-in-point, I’m of the opinion that Jaws is the greatest film of all time and it’s one of the few I’ve owned in every format. On the other hand, I’ve never felt the need to add any of the sequels to my collection.

Paramount finally upgraded the entire Indiana Jones franchise to 4K last year, offering all four films in a nicely packaged boxed set. Each featured an excellent transfer, with sharper lines and rich, accurate colors. For example, I saw details in Raiders I never really noticed before - the smoke in Marion’s bar, the sweat on people’s faces, the Egyptian hieroglyphics in the background - despite having seen the film dozens of times over the years. The audio had also been remixed in Dolby Atmos to great effect.

The only real drawback - for some of us, anyway - is that the movies were not available separately. Personally speaking, Raiders of the Lost Ark is not only the best film in the series, it remains one of the greatest action films ever made, more-than-worth revisiting over and over again. Conversely, Indiana Jones and the Temple of Doom will most-likely sit in the same box-set, never to be watched again. I’m certain even more Indy fans feel the same way about the fourth film. 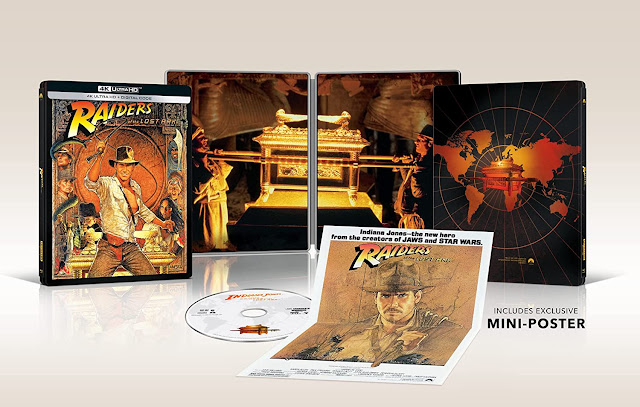 Now the first three films are getting individual releases as 4K SteelBooks, starting with Raiders (the other two are coming in July and August, but there's no confirmed release date for Kingdom of the Crystal Skull). I tend to view SteelBooks as home video’s version of hardcover novels. Paperbacks are fine for those casual reads, but for personal favorite authors and unquestionable classics, it’s nice to have something a little more higher-end.

Raiders of the Lost Ark is nothing if not a stone-cold classic, and aesthetically speaking, this SteelBook is a real keeper. In addition to the same great 4K UHD transfer, the case itself features artwork from the re-release poster. Better yet, a mini-poster of the original one-sheet is included. There are no additional bonus features, but it’s perfect for collectors who aren’t compelled to be completists.