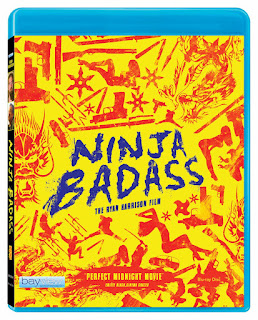 Some of you might recall Kung Fury, which poked fun at low budget action films of the ‘80s. Presented as though the viewer was watching it on an old VHS tape, the performances, music, dialogue and intentionally archaic special effects were hilarious and spot-on. Most importantly, the film was only 30 minutes long. Once all of the cliche-skewering gags were played out, it knew when to quit.

Ninja Badass, on the other hand, runs a deadly 104 minutes. That’s a long time to endure any movie coasting on a one joke premise. It’s even worse when that joke isn’t funny to begin with.

Ryan Harrison, who directs, writes, produces and stars, obviously has cult aspirations. But not-only does his film feel self-congratulatory, it reeks of desperation. He’s trying so hard to be stupid, outrageous, gross and offensive that the viewer is convinced his agenda is simply to get a reaction, even if it's negative (meaning I probably just played right into his hands). That may work for an attention-starved seventh grader, but it makes this film childishly pandering and ultimately pretty dull.

Ninja Badass is artless, tone-deaf and one-note, wearing out its welcome after about 15 minutes. Going out of your way to make an intentionally shitty movie has never been inherently funny, though buddies of that same attention-starved seventh grader might find some of Harrison’s sophomoric antics hilarious.