EVERYTHING EVERYWHERE ALL AT ONCE: Best Enjoyed Cold 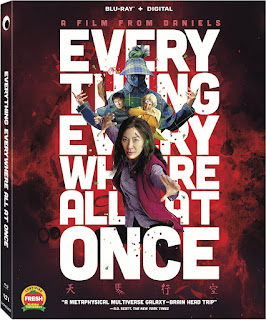 EVERYTHING EVERYWHERE ALL AT ONCE (Blu-ray Review)
2022 / 139 min.
FROM LIONSGATE
Review by Fluffy the Fearless😻

Sometimes going out of your way to avoid reading or hearing about a movie prior to seeing it is a great thing. In this day and age, that’s pretty damn tough to do, but in the case of Everything Everywhere All at Once, it’s worth the effort.

When I saw the trailer, it was Michelle Yeoh that got my attention. In our house, she’s a mutual celebrity crush and the trailer showcased both her physical and dramatic skills (not to mention considerable comic talent, which she doesn’t often get the opportunity to demonstrate). That same trailer revealed just enough of the actual plot to suggest a mind-bending ride, loaded with surprises, so I avoided reading any reviews or posts in various forums (where spoilers tend to run rampant).

I’m glad I did, because Everything Everywhere All At Once is best when you go into it completely cold, with absolutely no idea what to expect. All I knew about the plot was that it had something to do with the multiverse, a concept also explored in the new Doctor Strange film. But whereas Doctor Strange’s story inevitably succumbed to the usual Marvel histrionics, Everything Everywhere remains personal and humanistic while still taking the viewer on a wonderfully weird journey.

For anyone reading who isn’t familiar with the film by now, I’m gonna do you a solid and refrain from summarizing the story. Trust me, it’s a lot more fun having no idea what’s coming. I will say that there’s some demented genius behind it…intriguingly complex without ever becoming confusing and loaded with unpredictable plot turns. Tonally, the film is alternately suspenseful, funny, ominous, perceptive, pessimistic, heart-warming and sometimes shockingly raunchy (despite concocting a smart, labyrinthine story, writer-directors Daniel Kwan & Daniel Scheinert are happy to occasionally unleash their inner 12-year-old).

Additionally, the film features a bevy of wonderfully dynamic characters, even the primary antagonist. And although it was made for a fraction of the budget of a studio blockbuster, Everything Everywhere All at Once deftly combines imaginative special effects, creative production design and jaw dropping action sequences. These elements are all wrapped up in a tidy 139 minutes that feels more like 90, without a single throwaway scene to be found. If not the best film of the year so far, this one definitely lives up to the hype, especially if one is lucky enough to go into it cold.

“ALMOST EVERYTHING YOU EVER WANTED TO KNOW ABOUT EVERYTHING EVERYWHERE ALL AT ONCE” - An excellent 40 minute making-of doc with interviews and behind-the-scenes footage.

“PUTTING EVERYTHING ON A BAGEL: COOKING UP THE MULTIVERSE” - Another featurette.

AUDIO COMMENTARY - By writer-directors Daniel Kwan & Daniel Scheinert. These guys are fun to listen to.

MUSIC VISUAL - Basically the end-credits song and an image of the ‘bagel.’