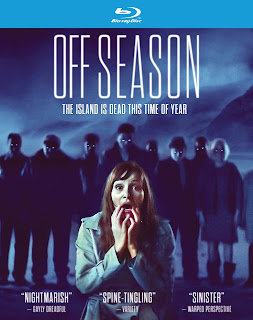 Offseason begins promisingly, with young couple Marie (Jocelin Donahue) and George (Joe Swanberg) driving an empty highway to a small coastal town. At first, the bridgekeeper (Richard Brake) isn’t going to allow them in, claiming the tourist season is over. But after Jocelin shows him a letter from the local cemetery groundskeeper - informing her that her mother’s gravestone has been decimated - he reluctantly lets them pass.

However, the groundskeeper is nowhere to be found. In fact, hardly anybody seems to be around, save for some locals in the tavern, and none of them appear very helpful. Night has fallen by this time, and worse yet, George and Marie crash the car trying to leave town. When Marie awakens, George is gone. What follows is a series of bizarre, surreal encounters related to a pact the town’s ancestors made with a sea demon, of which Marie’s mother was complicit.

Eerie aesthetics carry the film for a while, but it soon becomes apparent there isn’t really much of a story here, at least not one that warrants 84 minutes. Marie’s search for answers meanders a bit, taking too much time revealing plot twists that ultimately aren’t all that surprising, mainly because it’s a road well traveled.  Still, some scenes are undeniably effective - including a brief-but-chilling look at the sea demon - and the conclusion is kind of cool.

So even though it runs out of narrative gas pretty quickly - the story might have been better served as a short subject - Offseason is visually interesting enough to be worth checking out (though probably no more than once).