THE INITIATION OF SARAH and the Golden Age of TV Horror 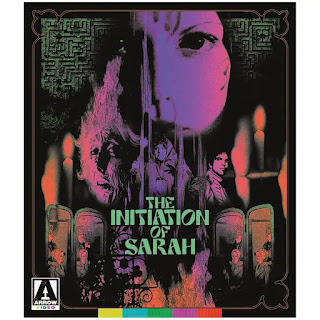 THE INITIATION OF SARAH (Blu-ray Review)
1978 / 97 min
FROM ARROW VIDEO
Review by Josey, the Sudden Cat🙀

There’s an entire generation of children raised in the ‘70s - including yours truly - whose introduction to horror was on television. We were old enough to be curious about the monsters lurking in theaters but mostly too young to do anything about it, so networks stepped in to oblige us by cranking out all kinds of creepy concoctions, a lot of ‘em being smaller scale knock-offs of popular movies. I guess you could consider them the “mockbusters” of their day.

The primary purveyor of these pictures was ABC, whose Movie of the Week series was a staple throughout the decade. Most movies were simply schedule filler and not particularly memorable, but some, like The Night Stalker and Trilogy of Terror, transcended their TV origins (and production values) to become cult classics.

Those of us who grew up on such televised terrors are in our 50s and 60s now, so the likes of Killdozer, The Stranger Within and Bad Ronald still hold special places in our hearts. Almost without exception, they seem comparatively quaint today, never as scary as we remembered, but rivisiting them stirs-up a lot of nostalgic warm fuzzies. The Initiation of Sarah is another one that left an indelible mark on us back then (and even inspired a remake decades later).

A sanitized rip-off of Carrie, it’s nevertheless an enjoyable take on the same concept, with Kay Lenz as the titular telekinetic who goes to college with her prettier, more outgoing sister, Patty (Morgan Brittany). While Patty is welcomed into a popular sorority led by Jennifer (Morgan Fairchild), Sarah ends up in one run by loony alumni Mrs. Hunter (Shelley Winters, in a wonderfully outlandish performance). Subjected to relentless torment by Jennifer, Sarah eventually uses her powers for revenge, egged-on by Mrs. Hunter, who sees her as a tool to restore her sorority to its former glory (through a demonic ritual sacrifice).

Never particularly scary, The Initiation of Sarah looks, sounds and plays like a TV movie from the era (all that’s missing are the Calgon commercials). But that’s also part of its charm today. Sure, there’s a bit of fun to be had at its expense, especially how blatantly it apes Carrie, right down to the characters. But even though it lacks style or panache, the film is never boring and the overall performances are actually pretty good, featuring a batch of famous faces for the time (or who would be in the future).

In addition to being a nifty blast from the past, Arrow Video throws in a lot more bonus material than ancient made-for-TV movies usually get. They’re mostly pretty interesting, too, such as those which attempt to explain the film’s social importance and underlying themes. But as someone whose horror education started with 90-minute night classes on ABC, I especially appreciated the retrospective discussions and commentaries on the era itself. The 1970s were arguably the Golden Age of TV horror, with The Initiation of Sarah being one of its cult classics.

“WELCOME TO HELL WEEK: A PLEDGE’S GUIDE TO THE INITIATION OF SARAH” - A highly amusing, semi-campy appreciation by Stacie Ponder and Anthony Hudson, who host a podcast called Gaylords of Darkness.

“CRACKS IN THE SISTERHOOD: SECOND WAVE FEMINISM AND THE INITIATION OF SARAH” - A surprisingly academic visual essay by film critic/historian Alexandra Heller-Nicholas, who discusses, at-length, the feminist aspects of the film and its time, while acknowledging that was probably not consciously intended.

“THE INTIMATIONS OF SARA” - Interview with film critic Samantha McLaren, who discusses the film and context of the time it was produced, as well as inevitable comparisons to Carrie.

“THE INITIATION OF TOM” - The only extra that features anyone actually connected with the film, Tom Holland reflects on his career, as well as his first break (credited with the story for this film). Holland, of course, would go on to be a successful writer-director.