ERASER: REBORN: No Arnold? No Problem! 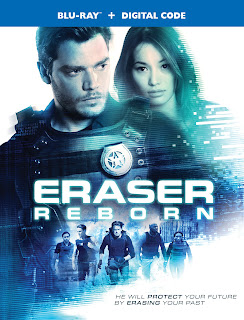 I know what some of you are thinking: A sequel to a 26-year-old Arnold Schwarzenegger movie…without Schwarzenegger? What’s the point?

To address the second question first, Eraser: Reborn hails from a long tradition of studios cranking out scaled-back direct-to-video sequels to hit films (which don’t require A-list star power to turn a tidy profit). Some of them - such as Sniper and The Marine - have since-become mini franchises, with sequels threatening to run into the double digits.

Dusting off Eraser makes a lot of business sense. No Arnold? No problem! The title offers enough brand name recognition to give Eraser: Reborn a little more attention than the usual straight-to-video action fest, especially since it isn't really a sequel. Instead, it’s a conceptual remake of the original film. The characters and situations are different - as is the technology - but the basic plot remains, albeit with action and special effects reflecting a much smaller budget.

This time, US Marshal Mason Pollard (Dominic Sherwood) is assigned to protect Rina Kimura (Jacky Lai), the wife of a vicious mob boss. The FBI wants her to testify against his organization, but since she’s also stolen millions in cryptocurrency from them, Rina’s an immediate target. Mason fakes her death, arranging a new life and identity in Cape Town, South Africa (where most of the story takes place).

However, fellow marshal and good buddy Paul Whitlock (McKinley Belcher III) informs him that the identities and locations of all their “erased” witnesses have been compromised. And apparently, most of them are also located in Cape Town (which doesn’t seem very bright, does it?). In reality, Paul has actually turned and is now working with the organization. He and revenge-minded Marco (Nathan Castle) recruit a small army of mercenaries to kill Rina and get back the cryptocurrency codes.

As these things go, I’ve seen worse. The action is plentiful and, considering the budget, sometimes impressive. While it isn’t always plausible, you gotta appreciate any movie that manages to work angry hippos and rhinos into the action (even if clumsy CGI renders them laughable). Elsewhere, Sherwood makes a serviceable protagonist, but nothing more. That might not be entirely his fault, since Pollard isn’t a particularly complex character to begin with. Belcher, on the other hand, is terrific fun, displaying sadistic, unrepentant ruthlessness as Whitlock.

Though capped off by an out-of-the-blue, eye-rolling romantic coda, Eraser: Reborn is a decent time killer, meant to be enjoyed in the moment and forgotten soon after. Director John Poque - no stranger to direct-to-video sequels - doesn’t try to reinvent the wheel here, earning his salary by putting together an economical action flick that more-or-less meets tempered expectations.

“THE WARRIOR AND THE WITNESS: MAKING ERASER: REBORN”