THE FIRST WIVES CLUB (Paramount Presents #32): If Bronson Was a Jilted Spouse 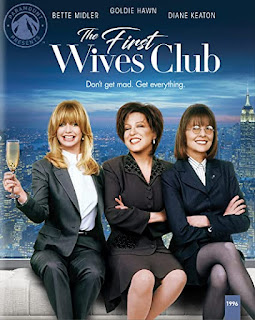 If you’re like me (aka, a middle-aged married guy), perhaps you can relate to this…

It’s the mid-90s and the missus decides she’s picking the next date night movie, choosing The First Wives Club. Though probably one of the last things you’d have personally chosen, you simply nod & smile congenially. After all, how often have you dragged her to watch Bruce Willis blow-away bad guys?

And like you suspected from the promotional campaign that practically serves as its own spoiler, The First Wives Club is the type of lightweight, formulaic comedy that its three stars can do in their sleep. Certainly not terrible - in fact, you sort of enjoy it because Goldie Hawn is still pretty hot for her age - there ain’t much to differentiate it from other adult-oriented comedies of the time (of which there were plenty). Maybe you snarkily mentioned this to your significant other upon leaving the theater, only for her to bring-up  the time you two paid good money to catch Death Wish V.

That’s different, you want to retort. That’s Charles Bronson we’re talking about. But deep in your heart of hearts, you know she's got a point. The First Wives Club and its ilk are no different than Bronson’s entire filmography since Death Wish: Cinematic comfort food. There may not be any surprises, but you aren’t likely to be disappointed because at least you know what you’re paying for.

Speaking of Death Wish…revisiting The First Wives Club for the first time since indulging my wife way-back-when, I realized that it’s thematically similar, as well. These three ladies may not be avenging the murder of a loved one - though I certainly wouldn’t put it past Bette Midler’s character - but seeing their methodic payback against the husbands who dumped them for younger women is as vicariously satisfying as watching ol’ Chuck take the law into his own hands.

Perhaps even more so, in some ways. The likes of John Wick and Paul Kersey dispatch their enemies with violent, cold efficiency (which they certainly had coming). Perhaps it’s just my vindictive nature, but sometimes I feel the antagonists in those films didn’t suffer enough, a quick death being almost too merciful. Conversely, Brenda (Midler), Elise (Hawn) and Annie (Diane Keaton) don’t just get even…they keep getting even. Their self-absorbed husbands are made to suffer where it hits them the hardest…their pocketbook. Not only that, these ladies plan to force them to live with the consequences of their indiscretions for the rest of their lives.

Of course, as revenge pictures go, The First Wives Club will always be more 9-to-5 than Death Wish. But while it lacks a body count, the film does dish up a similarly satisfying tale of comeuppance. Nicely remastered on Blu-ray for the first time (#32 in the Paramount Presents series), it remains an enjoyable serving of ‘90s comfort food. Just ask my wife.