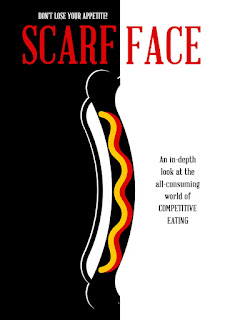 An amusing title sequence parodying 1983’s Scarface sets the tone for this look at the goofy world of competitive eating. For the most part, Scarf Face takes this so-called “sport” far less seriously than its participants do. What’s great about the film is that it doesn't set out to make these people look like fools. They manage that feat well enough on their own.

Much of the focus is on the MLE (Major League Eating), an organization run by jingoistic promoter George Shea, who comes across as an aggrandizing composite of Vince McMahon, Donald Trump and a carnival barker. Ruling the MLE with an iron fist, he expects complete loyalty from his eaters, doesn’t suffer competition or criticism too well and pretty-much ostracizes anyone with the balls to question his authority. And of course, he declares competitive eating to be a legitimate sport worthy of the Olympics (though his own wife shows up to disagree, admitting that this is a weird way to make a living). Several MLE dissenters - usually former contestants - add their two-cents over Shea’s unscrupulous tactics.

But the meat of the film - no pun intended - are segments featuring the eaters themselves. For some reason, a lot of these folks have extraordinarily high opinions of themselves, displaying hilariously-misguided arrogance regarding their “talent.” Most appear oblivious to the fact their chosen profession - yes, some of them do this for a living - is essentially a freak show.  Especially amusing is Joey Chestnut, apparently the Michael Jordan of hot dog eating contests. In true Rocky fashion, the film treats us to the drama of Joey losing his title one year, leading to personal crises, career introspection and even a training montage before his big comeback. From the moment we meet him, it’s obvious Joey considers himself a true athlete.

The unexpected deaths of a few eaters notwithstanding, Scarf Face is a highly amusing documentary that cleverly subverts the self-importance displayed by its subjects. But even if one shares the opinion that gorging on dangerous amounts of food somehow qualifies as a sport, the film is a fascinating look at what makes these people tick.

INTERVIEW THE WALT HICKEY - Hickey is a writer who often covers competitive eating events, and humorously questions the claim that Nathan’s Hot Dog Eating Contest has really been going on for 100 years.

INTERVIEW WITH ED “COOKIE” JARVIS - A former MLE competitive eater who’s lost a ton of weight and has no love for the MLE.

OUTTAKES WITH ACTOR DAVE SWEENEY - Outside of his appearance in this film, I don’t know who he is either.

COMPETITIVE EATER DEATH SEGMENT - One which was featured in the film, one which wasn’t…a radio station water drinking contest which resulted in a woman’s death.