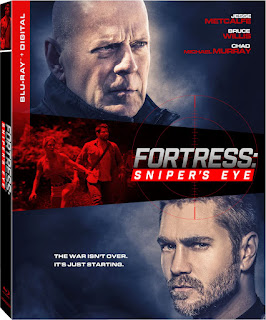 Since Bruce Willis has announced his retirement after being diagnosed with aphasia, it looks like Fortress: Sniper’s Eye will end up being one of the last films. Considering how many modern classics he’s been a part of, it’s a sad swan song to what was once a great action career.

The first Fortress (released last year) was emblematic of the video junk he’d been prolifically cranking out for the past decade, and some of us writers have made great sport of his willingness to collect paychecks for glorified cameos and lethargic performances. Most of those movies would have been terrible even without his participation, and with poignant hindsight, it’s obvious he simply wanted to keep acting, even if in a diminished capacity.

But not only is Fortress: Sniper’s Eye even worse, the pall of Willis’ condition hangs over everything. The story has him bedridden for a good portion of the running time, and during some of the one-on-one conversations with other characters, his scenes appear to have been shot separately. Knowledge of his illness, and watching him noticeably struggle with each line, is a depressing experience.

Filmed back-to-back with the first film - and apparently the second part of a trilogy - Fortress: Sniper’s Eye has the exact same plot, with the exact same disgruntled bad guy (Chad Michael Murray) attacking the exact same officers’ retreat for the exact same reason (nabbing some cryptocurrency). Essentially a remake with the exact same cast - plus a bitchy teenager thrown-in for good measure - the film is an indifferently-directed medley of low-wattage action, dull performances and silly dialogue, though Robert (Willis) does eventually get out of bed to shoot some bad guys.

Where we once chastised Bruce Willis, I suppose one could now draw some inspiration from what turns out to be unwavering dedication in the face of adversity. Too bad it’s in the service of such a terrible film. I hate to see him go out like this.

“MAKING FORTRESS: SNIPER’S EYE” - Your standard promotional featurette where the cast and crew talk-up the film as if it’s one of their career highlights.