HOSTILE TERRITORY and the Questionable Villains 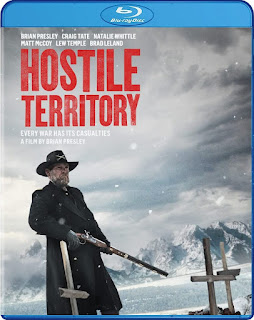 The “Orphan Train” was a real thing in the 19th Century, when abandoned or orphaned children were shipped west to live with new families on the frontier. While some found loving homes, others essentially became slave labor. Considering the premise of Hostile Territory, that would have been a more compelling storyline than the route taken by writer/director/star Brian Presley.

Not that it’s a bad film. As budget conscious westerns go, Hostile Territory is fairly engaging. It’s just that serving-up a batch of murderous Native-Americans as the primary antagonists seems like an odd move for a western in this day and age. Perhaps Presley sensed it, too, which is why he shoehorns some heavy-handed - and a tad cringey - commentary into the narrative about learning to peacefully coexist. But having the main character put the hurt on land owners trying to exploit his kids would have made a better story.

Instead, Jack Calgrove (Presley) is a Civil War officer presumed dead, but is actually a military prisoner. Since his wife has also died, his three young children are put on an Orphan Train to meet up with their older brother, Phil (Cooper North), an ex-soldier who plans on raising them on newly acquired land in Montana.

Once the war ends and Jack’s released, he learns of the family’s destination, a journey will take them right through hostile Indian territory, where an angry tribe regularly attacks and kills those passing through. Jack stoically heads out to rescue his family, joined by war buddy Desmond (Craig Tate) and some new friends, including a band of Native-American sharpshooters. Meanwhile, Phil's own traveling band grows as well, including several more orphans and a drab young love interest.

The tone continually shifts - sometimes jarringly - from violent, revenge-fueled action to Waltons-style sentimentality and back again. Additionally, the story is capped by a conclusion where all conflicts are resolved a little too patly to be convincing…or comfortable. Still, the film is entertaining for what it is. Well paced and adequately shot, at least it doesn’t look like it was filmed on some backlot. The overall performances are pretty decent, too. While Hostile Territory ain’t gonna make anyone forget The Outlaw Josey Wales, it’s probably worth 90 minutes of your time.