KINKY BOOTS: The Biggest Surprise is No Surprise 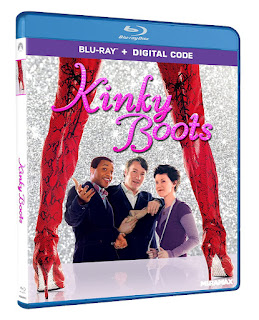 A few aspects of Kinky Boots came as a bit of a surprise.

First, I was always under the impression it was a musical. That assumption probably stemmed from the fact it was later adapted for Broadway, which gained a lot more attention (at least here in the States) and won several Tony Awards. Upon learning the film was simply a British comedy, my oldest daughter, who adores all-things-Broadway, decided to opt out.

Personally, I think she should have stuck with it. While nobody breaks into song & dance on the streets - or in this case, a factory floor - she missed out on Chiwetel Ejiofor belting out standards as “Lola,” a popular drag performer whose shows pack ‘em in at a nightclub in London. Bold, brash and wildly entertaining, these musical numbers are…well, fabulous. More importantly, Ejiofor totally nails the role without portraying her as a stereotype.

I was also surprised to learn Kinky Boots was inspired by a true story, that of a British shoe factory that began making women’s style shoes for men. I’m certain that’s where the similarities end, since the remainder of the film adheres to tried-and-true story elements we’ve seen in countless other “against the odds” comedies. In this case, Charlie Price (Joel Edgerton) suddenly inherits the family shoe factory after his father dies. Though they’ve been making the same reliable men’s loafers for decades, Charlie learns the company is struggling and he ends up being forced to lay off some workers to keep things running.

During a visit to London, Charlie gets knocked out while saving a woman from attackers. He wakes up in the dressing room of that woman, who turns out to be Lola (Simon, when not in drag). Though Lola loves performing, she’s always breaking her shoe heels and bitches that they can’t support a man’s weight. This gives Charlie an idea: If his company’s traditional shoes are no longer in demand, how about designing and creating a line of shoes for a niche market he never knew existed?

That unusual idea notwithstanding, Kinky Boots tells a fairly straight-forward story, most of it more charming than truly funny. Affable performances by Edgerton and Ejiofor offset the assembly line of familiar plot elements…misunderstandings, mild conflicts, moments of introspection, learning to respect the differences in others, the protagonist risking it all against great odds, and of course, the big finale where everything is at stake (in this case, a make-or-break fashion show in Milan).

The fact that it’s all so unsurprising may be the biggest surprise of all. Though constantly predictable, Kinky Boots puts a congenial spin on things, largely due to engaging characters, good performances and a considerable amount of reverence for the alternative culture it depicts. That-alone might make it worth checking out, even without its own showtunes.

FEATURETTES - “The Real Kinky Boots Factory” (an interesting 15 minute look at the company that inspired the film); “The Journey of a Brogue”