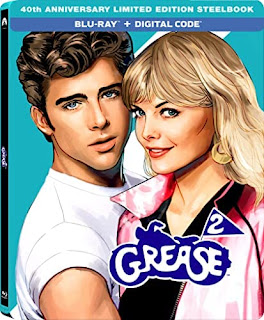 To those who believe Hollywood is currently glutting theaters with unnecessary sequels, allow me to introduce you to the glorious ‘80s.

Truly the decade when nothing was sacred, the ‘80s were rife with sequels absolutely nobody asked for. The Sting II, Butch and Sundance: The Early Days, Caddyshack II, Staying Alive, Death Wish II and Arthur 2: On the Rocks arguably rank among the most contrived, pointless sequels ever made. Perhaps the most notorious of them was Grease 2.

Like many of those aforementioned films, Grease 2 was produced without the participation of anyone who made the original interesting. Instead of the onscreen chemistry of John Travolta and Olivia Newton-John, Maxwell Caulfield and then-unknown Michelle Pfeiffer struggle in vain to fill their shoes (though Pfeiffer comes close). Elsewhere, the rehashed story, forgettable songs and conspicuously-exuberant cast confirm Grease 2 was always more of a financial decision than a creative one. Audiences didn’t buy it and steered clear in droves.

But unlike those other superfluous sequels, Grease 2 slowly developed a surprising cult following over the years. One possible reason could be Pfeiffer, who’d soon become a superstar. And admittedly, watching her effortlessly outclass her co-stars has a certain appeal, especially since it was the comparatively bland Caufield who was supposedly the ‘next big thing’.

Some of its appeal could be at its own expense. Grease 2 never descends into pure camp, but it quickly becomes apparent the overachieving eagerness of the hungry young cast is completely at odds with the assembly line approach to the rest of the film. The futility of their collective effort to fill such big shoes is kind of amusing.

But let’s not forget good old fashioned nostalgia, which has people of a certain age carrying a torch for all kinds of weird ‘80s artifacts (how else can you explain Maximum Overdrive’s enduring popularity?). Nostalgia would certainly explain this new SteelBook. Such packaging is usually reserved for films that have achieved at-least some kind of classic status, if even among a niche crowd. Said-crowd might be disappointed that there are no bonus features other than a digital code, and while the SteelBook is nice, the artwork is almost identical to previous releases.

The film itself remains emblematic of ‘80s-era sequel-itis…slickly made but completely  unnecessary, which might ironically be part of its oddball appeal to nostalgics and cultists. But I think even they would agree it’s no Grease.