THE CONTRACTOR and the Egg McGuffin 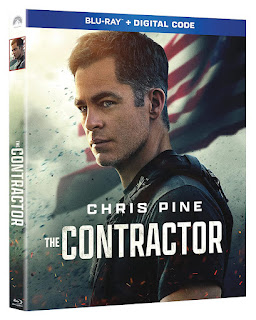 I enjoy Egg McMuffins. They don’t rock my world or anything, but every now and then, I wake up with the urge to grab one on the way to work, already anticipating exactly what it’s gonna taste like. Say what you will about McDonalds’ increasingly automated business model, at least you aren't likely to be disappointed by the food, providing you have reasonable expectations of what you’re getting. Sometimes there’s comfort in that kind of predictability.

The Contractor is a lot like the Egg McMuffins I occasionally crave. Watchable without ever being particularly inventive, the film stars Chris Pine as James Harper, a decorated Marine who’s unexpectedly discharged for a drug violation. He’s invited by old war buddy Mike (Ben Foster) to join a private military group run by Rusty (Keifer Sutherland), which does government-sanctioned mercenary work around the world. Being in financial dire straits - with a wife and kid to support - James reluctantly takes the job.

James, Mike and a few others on the team are immediately sent to Germany. Their mission is to kill a scientist suspected of working for ISIS and grab a computer containing his biological data. The mission doesn’t go as planned and most of the team is killed. After Mike fails to meet him at the rendezvous point, Chris is on his own, pursued by assassins. Of course, the viewer will accurately figure out - long before Chris does - that the mission is more nefarious than they were led to believe and they’ve been set-up by Rusty. Naturally, Chris wants revenge, especially after learning the real contents of the computer data.

But really, the data is just a McGuffin. It could just as easily be a mysterious briefcase, a cache of diamonds, the Maltese Falcon or the Ark of the Covenant and the narrative would pretty much remain the same…the mission, the conflicts, the betrayal and the payback. We’ve seen this scenario in so many other mid-budget action films that we can anticipate every plot turn before it happens.

Is that a bad thing? Not necessarily. After all, what makes an Egg McMuffin such dependable morning cuisine is that has the right amounts of classic comfort food efficiently assembled in a portable, easy to consume package. Similarly, The Contractor is a slick, skillfully-made composite that meets expectations without ever exceeding them. The same can be said of Chris Pine’s performance. Like such peers as Mark Wahlberg and Jason Statham, he’s a perfectly reliable action hero without having to work that hard at it.

Though devoid of surprises or originality, The Contractor is an agreeable time killer for undiscriminating action fans, a film meant to be consumed, enjoyed and forgotten shortly afterwards. In that respect, I suppose you could consider it the Egg McMuffin of action movies…with an Egg McGuffin to drive the narrative.