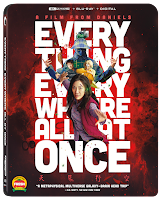 😺EVERYTHING, EVERYWHERE ALL AT ONCE arrives July 5 on 4K Ultra HD, Blu-ray and DVD from Lionsgate
The mind-bending action-adventure Everything Everywhere All At Once arrives on 4K Ultra HD + Blu-ray + Digital, Blu-ray + Digital, and DVD July 5 from A24 and Lionsgate. The film stars Michelle Yeoh as an unlikely hero who must channel newfound powers to fight fearsome dangers from the multiverse. Directed and written by Daniel Kwan and Daniel Scheinert, the writing-directing duo collectively known as the Daniels (Swiss Army Man). SYNOPSIS: Evelyn Wang (Michelle Yeoh), a flustered immigrant mother, is contacted from a parallel universe and told that only she can save the world. The unlikely hero must learn to channel her newfound powers and fight through the splintering timelines of the multiverse to save her home, her family, and herself in this big-hearted and irreverent adventure. With Stephanie Hsu, Ke Huy Quan, Jenny Slate, Harry Shum Jr., James Hong, and Jamie Lee Curtis.

😺DOWNTON ABBEY: A NEW ERA Available On Digital June 24 Blu-ray and DVD On July 5 From Universal
It’s time to return to Downton in DOWNTON ABBEY: A NEW ERA, available to own with bonus content on Digital June 24, 2022, and on 4K Ultra HD, Blu-ray and DVD on July 5, 2022 from Universal Pictures Home Entertainment. Earning an “A” CinemaScore and celebrated by critics as “fun and heart in equal measure” (Screenrant), the Collector’s Edition arrives just in time for a summer movie night in with exclusive and exciting featurettes to give viewers a more in-depth look behind the scenes with fan-favorite stars. The motion picture will also be available in a Limited-Edition Gift Set, featuring the Blu-ray Disc, DVD, and Digital Code, presented in exclusive packaging along with vintage-style postcards, a photo book and a collectible Downton Abbey branded stainless steel tea strainer with a velvet bag. Available only while supplies last, this special offering is the must-own gift for any Downton Abbey fan or to add to your own collection. 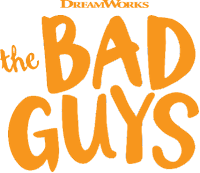 😺THE BAD GUYS Coming To Digital, 4K, Blu-ray and DVD June 21 from Universal
Follow the most notorious criminals in the world and find out if they can pull off their biggest job yet – going good – in DreamWorks Animation’s THE BAD GUYS, a hilarious high octane family adventure that is sure to bring the entire family together for non-stop action and laughs. Showcasing a brand-new crew of lovable and edgy characters bursting with personality, the film embraces individuality with each character’s unique skillset, ranging from hacking and disguise to muscle and drive. Available to own on Digital, 4K Ultra HD, Blu-ray™, and DVD on June 21, 2022 from Universal Pictures Home Entertainment, THE BAD GUYS Collector’s Edition showcases an all-new original short and comes filled with never-before-seen bonus features including deleted scenes, exclusive interviews with cast and crew, Mr. Snake’s frozen pops recipes, character drawing tutorials and more, offering endless fun and sure to get the entire family into ‘summer’ mode.
Posted by D.M. Anderson at 2:20 PM