IP MAN: THE AWAKENING: What's in a (brand) Name? 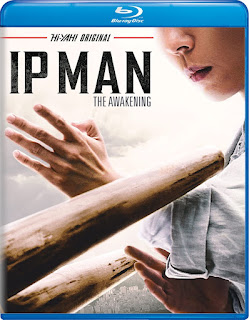 Two major obstacles stand in the way of Ip Man: The Awakening. Unfortunately, it doesn’t overcome either of them.

First is the looming shadow of Donnie Yen. Ip Man has been depicted in a slew of movies, spin-offs & TV shows over the years, and portrayed by several different actors. However, Yen's indelible performance in the four official Ip Man films is a tough act to follow…if not impossible. Comparatively speaking, newcomer Miu Tse isn’t up to the challenge. He’s got some nice moves, but totally lacks the dramatic chops to make the character engaging (even in martial arts films, that matters).

Second, and most glaringly, this is the Ip Man legend served up as a brand name. Even if Tse was the genre’s Lawrence Oliver, his character is almost completely devoid of any personality or background, apparently written with the conceit that simply calling him Ip Man is all the character exposition we need. Hell, he could be renamed Steve without impacting any aspect of the story or action.

Set in the 1930s, the story has Ip Man returning to Hong Kong and running afoul of British slave traders, led by a standard-issue, severely over-confident mob boss named Stark (played with laughable amounts of bemused detachment by Sergio De Ieso). Ip Man becomes a neighborhood savior, dispatching henchmen left-and-right with such efficiency that the outcome is never in doubt. There’s action to spare, which is well choreographed but never particularly exciting, mainly because these characters are all cardboard cut-outs.The film culminates in a martial arts showdown pitting Ip Man’s Wing Chun skills against British “Bartitsu” (a combination of various fighting styles). It’s a perfunctory climax that’s indicative of the entire film…more of a genre expectation than a narrative necessity. While competently assembled, Ip Man: The Awakening is ultimately an empty exercise in by-the-numbers filmmaking, cynically cashing-in on brand name recognition.