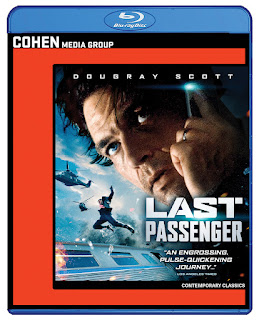 Though it has elements of a traditional disaster movie, Last Passenger is a modestly-budgeted but excellent British thriller in the vein of Duel and Speed. It also demonstrates one doesn’t necessarily need $100 million and chest-thumping spectacle to create an enjoyably nerve-jangling action film.

The premise is awesomely simple. Dougray Scott plays Lewis Shaler, a widowed doctor on-board a commuter train with his son, Max. Later, a mysterious hijacker comes aboard and takes over the train. Not-only is it now speeding toward destruction, the man has killed the conductor and disabled all the emergency brakes. We never actually see the him - though Lewis briefly does - nor are his intentions made clear. However, another passenger suggests he’s a suicidal madman.

Set almost entirely inside the train, the story features only six characters, all of whom are thoroughly fleshed-out during the first act. But unlike the stock celebrities introduced in a typical disaster movie, these people are not-only engaging, each actually serves a narrative purpose at some point or another. None of them are experts, nor do any conveniently reveal a particular skill to solve their predicament. They’re just everyday folks, adding a level of plausibility atypical of films like this.

As the group’s de facto leader, Scott displays the right amounts of determination, intelligence and fallibility to make a convincing protagonist. However, my favorite character is Jan (Idda Goldberg), a tough-talking young Russian who initially comes across as a dangerous bully, but turns out to be the film’s most charming, sympathetic character (and pretty smart, too). Even the most perfunctory subplot, the meet-cute between Lewis and fellow passenger Sarah (Kara Tointon), becomes an important story element through the protective bond she establishes with Max.

Last Passenger ended up being writer-director Omid Nooshin’s only film (he died in 2018) and didn’t get a lot of attention on this side of the pond. Perhaps one reason is that it’s not loaded with slam-bang action and special effects. In fact, the sparsely-used CGI is pretty rickety. But the lack of big-budget spectacle is compensated by a smart story, good writing, believable characters and a pace that methodically builds tension as it goes along. A small winner all around.

SOUND BITES - running a little over 30 minutes, this is a series of cast/crew responses to various questions about the film.