THE GUILTY and HIGH TIDE: A Damn Good Double Feature 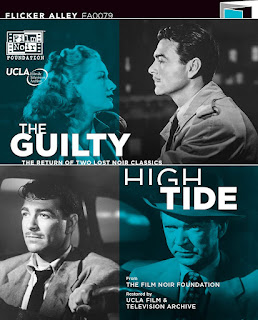 Released the same year, The Guilty and High Tide are excellent examples of low budget film noir, both produced by ambitious entrepreneur Jack Wrather. Not only have they been rescued from obscurity with great restorations, this set includes a big batch of substantial bonus features that are just as interesting as the movies themselves.

In The Guilty, Mike Carr (Don Castle) recounts the story of an unusual relationship between himself, troubled ex-war buddy & roommate Johnny (Wally Cassell) and twin sisters Estelle and Linda (both played by Bonita Granville). Estelle is essentially the “bad” girl who’s tumultuously involved with both men, but Johnny eventually falls in love with “good” girl Linda (which Estelle selfishly tries to disrupt). When Linda turns up murdered, Johnny is naturally the prime suspect, especially since he suffers from PTSD and is prone to blackouts. Though he declares he’s innocent, Johnny goes on the run, while Mike does a little investigating of his own. With an intriguing story, economical direction by John Reinhardt and excellent performances - especially Castle - The Guilty is a crackling little thriller with a great twist ending.

Wrather taps Reinhardt & Castle once-again for High Tide, this time with Castle playing cynical private dick Tim Slade, hired to protect unscrupulous newspaper editor Hugh Fresney (Lee Tracy) from the wrath of local gangster Nick Dyke, the subject of an upcoming bombshell news story. But it becomes a murder investigation when the paper’s owner, Clinton Vaughn (Douglas Walton), is killed. Though Dyke is a primary suspect, one can’t rule out Vaughn’s money-grubbing trophy wife, Julie (Julie Bishop), with whom Slade once had a relationship. Like The Guilty, this one is presented in flashback and features another nifty twist ending, but boasts a more intricate storyline with intriguing plot turns along the way. Again, Castle makes an excellent protagonist. Speaking of which, it’s a shame he didn’t have a bigger career. His resemblance to Clark Gable notwithstanding, he had a naturalistic style all his own which certainly suited film noir.

But Castle’s back story is only one of many featured among this set’s generous collection of bonus material. Though not always related exclusively to these movies, they’re of great historical interest, especially the life and career of producer Jack Wrather. He and wife Bonita Granville made a remarkable team beyond movies and TV. There are also features on others involved in these films, including the eclectic career of director John Reinhardt. So not-only do The Guilty and High Tide make a damn good double feature - belying their Poverty Row origins - the stories of the people behind them are equally interesting. For film noir lovers, this set is a must-own.

JACK WRATHER: A LEGACY OF FILM AND FRIENDSHIP - A rarity in Hollywood, this is an affectionate profile/tribute to a b-movie mogul who appeared to be a genuinely nice guy. This also features extensive info and anecdotes about actress Bonita Granville (Jack’s wife) and actor Don Castle, a longtime friend of Jack’s and the star of both of these films (unfortunately, his own story ends tragically).

NIGHTMARE: THE LIFE AND FILMS OF CORNELL WOOLRICH - An engaging doc about prolific crime fiction writer (The Guilty is based on one of his stories).

JOHN REINHARDT: DIRECTION WITHOUT BORDERS - An appreciation of this largely unheralded director, despite helming dozens of films in various countries and languages.

LEE TRACY: THE FASTEST MOUTH IN THE WEST - A look at the career of actor Lee West, who co-stars in High Tide and was best-known for playing cynical, fast-talking newspaper men.