DOCTOR STRANGE IN THE MULTIVERSE OF MADNESS: Sam Raimi to the Rescue 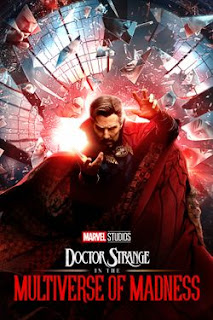 Detractors can say what they will about the Marvel film franchise becoming increasingly formulaic (an argument that isn’t entirely wrong), but at least Doctor Strange in the Multiverse of Madness unquestionably reflects the style and sensibilities of the guy hired to direct it.

With a manic pace, absurd humor and trippy visuals, Sam Raimi’s stamp is all over this. While he’s certainly no stranger to Marvel - having directed the first Spider-Man trilogy - Raimi draws more personal inspiration from his own Evil Dead franchise (Army of Darkness, in particular). I suppose a horror-tinged sequel might not be what traditional MCU fans are expecting, but considering the premise, his approach is exactly what a film like this needs. Besides, what franchise isn't made better with zombies?

Additionally, Raimi brings some of old friends along for the ride, including composer Danny Elfman and Bruce Campbell, the latter of whom appears in a brief but hilarious homage to his Ash character from Evil Dead. Speaking of which, in addition to the usual batch of MCU Easter Eggs and cameos, Raimi throws in a few of his own, including that same puke-colored Oldsmobile Delta 88 that has appeared in nearly all of his films.

The film never forgets that it’s part of a bigger universe, though, which sometimes becomes a narrative liability. More than ever, the plot and characters are built on the conceit that the audience is already familiar with what’s transpired, not only in MCU films, but TV shows only available on Disney+. In fact, the self-serving agenda of the primary antagonist, Scarlet Witch (Elizabeth Olsen), is the direct result of her actions in WandaVision, meaning if you aren’t a subscriber, her motives are sort-of perplexing. Additionally, many “new” characters - including some acquired from Disney’s purchase of Fox - are introduced with the obvious intent of setting-up future movies and shows. Fanboys might appreciate the shout-outs, but for casual viewers, they might be an unnecessary distraction...to say nothing of bewildering.

Still, when focusing on its wonderfully bonkers story, Doctor Strange in the Multiverse of Madness is a lot of fun and arguably better than the first film. Benedict Cumberbatch slips comfortably back into the title role, depicting Steven Strange as enjoyably arrogant as ever, if not a bit more introspective about his past. Once again, “sidekick” Wong (Benedict Wong) is a terrific comic foil, while young newcomer Xochiti Gomez is quite engaging as America Chavez (a relatively new Marvel character, perhaps being groomed for a film or series of her own). Loaded with the usual visual fireworks - particularly when leaping through the Multiverse - this is another solid entry in the MCU, bolstered by Sam Raimi’s indubitable style.