SURF NAZIS MUST DIE Never Lives Up (or down) to Its Title. 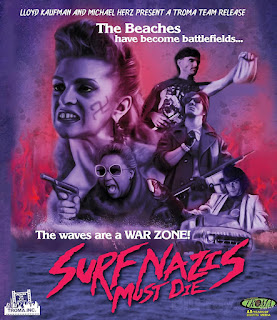 For a certain fringe crowd, Troma Entertainment needs no introduction, nor does the company’s loony landlord, Lloyd Kaufman. For everyone else, they’ve been prolific purveyors of sleazoid cinema for decades and probably best-known for the Toxic Avenger franchise, the absolute closest the studio ever got to releasing anything considered mainstream.

Die-hards know what to expect…lots of blood, sex, nudity and good natured immaturity, generally presented with a big middle finger to the PC crowd. However, for anyone curious about what they might be missing, there’s a distinct difference between a Troma film and one simply distributed by them.

For example, 1987’s Surf Nazis Must Die certainly has a Troma-worthy title, but any similarities end there. Unlike the cultivated crassness of, say, Class of Nuke ‘Em High, this film squanders its whacked-out premise. Sure, there are Nazi surfers. And yeah, they must die. But despite that tastelessly tantalizing title, the whole thing is not-only cheap, meandering and amateurish, it’s actually pretty tame. If Kaufman were minding the store, there’d be gobs more blood, boobs and buffoonery.

Most damning of all, it's almost never funny. Not on purpose, anyway. Some humor might be found in the godawful performances, lame writing and director Peter George’s superficial, heavy-handed attempts at cult hipness. Other than getting it onto video shelves, Lloyd Kaufman and his Troma team played no part in this…and it shows. Maybe that’s why most of this Blu-ray’s bonus features are about Troma itself, all of which are a lot more frivolous fun than the movie.

There might be some nostalgic value for those who grew up in the horror section of their local video store, but for anyone seeking cheap thrills, Surf Nazis Must Die never lives up (or down) to its title.

FEATURETTES - “Lloyd Kaufman’s Autobiography” (unfortunately, not a bio…just a promo for Lloyd’s book); “Radiation March” (some weird dance number); “Scenes from the Tromaville Cafe” (pretty-much the only bonus feature related to the movie); “Indy Artists vs.Cartels” (Lloyd Kaufman’s diatribe against the big studio system...which I kinda get); “The Hollywood System” (More Kaufman vs. Hollywood).