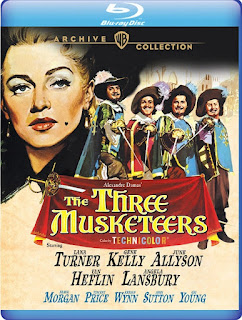 With Lana Turner’s top billing in 1948’s The Three Musketeers, there's no questioning who was the bigger star at the time, even though she’s more of a supporting player here. However, she does give the film’s best performance. As Milady de Winter, Turner is seductive, treacherous and utterly hateful, making the character’s ultimate fate pretty damn satisfying.

Not that the rest of the cast are slouches. Van Heflin gives head-musketeer Athos considerable gravitas, while Vincent Price is wonderful as the conniving cardinal, Richelieu. Legendary character actor Keenan Wynn also stands out with his amusing turn as Planchet, d’Artagnan’s loyal servant. Speaking of d’Artagnan, I would argue that Gene Kelly is miscast in the lead role (and a maybe bit too old), but he’s certainly entertaining, especially during the numerous action sequences, which he apparently helped choreograph.

Those action scenes - the swordplay, in particular - are still pretty amazing seven decades later. The initial clash pitting d’Artagnan and the musketeers against Richelieu’s guards is a definite highlight. Rousing and often quite funny, the scene deftly establishes the film’s breezy tone, an aspect which not only endeared it to audiences, it arguably influenced later adaptations of the story (most notably, Richard Lester’s similarly star-studded 1973 film, which is still this writer’s favorite version).

Though a bit overlong, The Three Musketeers remains an exciting adventure film bolstered by a great cast (including June Allyson, Angela Lansbury, Frank Morgan & Gig Young), as well as handsome, colorful production design (which really shines in this vivid Blu-ray transfer). Whether or not this is the definitive adaptation of Dumas’ classic novel is certainly open to spirited debate, but time and umpteen retellings haven’t diminished the fun found here.